Ive been living here in whistler for nearly 3 years now, and much like everyone else on here skiing is my life. I have been skiing now for 20+years and have been an active member on newschoolers for over 10 years. Although I don't post very often, I am checking the forums and keeping up with the news, pictures and videos posted by our community almost daily.

Today was a hell of a day riding blue park over on BC, Sun was out and the Snow was soft....so naturally the park was BUSY.

Mid way through my afternoon I took a small spill off the quad kink, slid out onto my side just next to the rail. Before I even had time to react, stand up and clear the space another skier slid the rail just behind me nearly clipping me with his tips. After sliding the rail said skier stopped, faced back up the hill and yelled at me 'get the fuck out of the park if you don't know what you're doing!'

This sort of reaction has become far to common. Don't get me wrong, the comment had no effect on my day and I still had a lot of Fun! But it did get me thinking.... Whats with all the hate..?

Ive overheard many skiers, either on the lifts or in the parks, complaining about the lack of 'park etiquette'. This really upsets me because these remarks are almost always directed towards the snowboards here in whistler....

Personally I feel like the overall knowledge of 'park etiquette' is far higher across the board in the snowboard community here. Park skiers need to take a page out of the snowboarding book. I have never almost been clipped by a snowboarder in the park....NEVER. So guys and gals... slow it down a bit! Sure flowing a lap top to bottom without stopping is awesome and fun. But its dangerous, for everyone when the park is that busy.

Is stopping above a feature for 10 seconds to make sure its clear that much of an inconvenience? Will it really put that much of a damper on your day..? Most snowboarders do things that way and they are still having fun...

Download-My-Apps
Posts: 5065 - Karma: 1,011
Karma: 1,011
Posts: 5065
No Life
Yes and no. In general we could all stop the hate. I do get frustrated with the mobs of snowboarders at the top of the park that all stare at the jump. Like I can't get mad because they are doing whats right. But this does sometimes result in me snaking.

pow_pow~
Posts: 1429 - Karma: 1,802
Karma: 1,802
Posts: 1429
Insane
if had snowboarders come behind me on the large jump line on blackcomb like literally two metres behind me, same thing with the mediums on whis. it is the most annoying thing because you get so scared.
like what if you fall or something theyll land right on top of you
May 28 2013 4:51PM 0 0 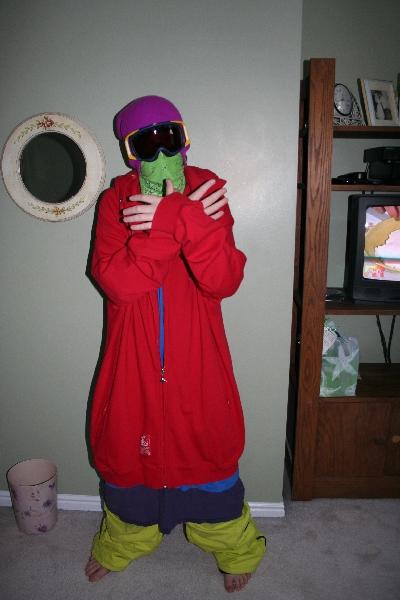 JAHBRADOR
Posts: 2994 - Karma: 16,616
Karma: 16,616
Posts: 2994
Addict
Yeah i somewhat agree with this. I have sometimes found myself saying things to people in the park that i genuinely do feel bad about. However, as you all know, if you have a trick you want to do and you are zoned in and someone breaks your concentration, most people would say something in the heat of the moment.
Finally, that mob of snowboarders that stand before every rail with that guy with the gopro filming them deserve to be snaked. They stand there for fucking ages and take so long to drop. Their hands look gay as fuck too, all limp-wristed and shit.
May 31 2013 10:29PM 0 0

SDrvpr
Posts: 851 - Karma: 649
Karma: 649
Posts: 851
Insane
This applies to everyone, not just skiers. I get snaked by crews of snowboarders everyday and have ran into a few trying to snake me (I don't stop for snakes). Snowboarders I find tend to be chill most of the time and the ones I've ran into have apologized. On the other hand, I find that skiers tend to be the rude ones. I once knuckled a jump and had a skier kid tell me to get the fuck out of the park. There seems to be so many rude, overprivileged little skiers in those freestyle programs that think they're the best skiers in the park. I don't think the lack of park etiquette will ever be fixed, because of the amount of spoiled kids living in Whistler (not saying all locals are spoiled, but kids in Whis tend to have loaded parents). Most small inexpensive resorts I've been to have been mad chill.
Jun 1 2013 1:16AM 0 0

joelski
Posts: 1012 - Karma: 726
Karma: 726
Posts: 1012
Insane
i get kind of pissed off at a certain point when i am snaked like my buddy was tring a new trick and as he was dropping in some snowboarder came up and jump the fense on the left of the start of the blackcomb park he cut everyone off and was ridding up to the first jump at the same time as my buddy nstead of backing away and going around the jump he road close up to it and sprayed my buddy right when he was at the lip. if it had been a skier instead of a snowboarder i probably would have been just as pissed but i rarely see any skiers doing that. i am not justifying being angry at people but i think that people should stop snaking like this
Jun 5 2013 5:36PM 0 0

albatross.
Posts: 4380 - Karma: 769
Karma: 769
Posts: 4380
No Life
you were in the right, real park etiquette is waiting your turn even if you think you are better than everyone else and skiers are notoriously terrible at it. maybe its because they never learned skatepark etiquette or maybe its because they are mostly spoiled rich kids but its honestly embarrassing. obrien and that other snakebullet dude got banned from seymour for being idiots and they still wait their turn and ride the park properly, there is some shit you just don't do and its always skier kids violating it.
i got pissed at some kid up on seymour this year because i was dropping in to the jump line after waiting for everyone else to drop, and he just tears into the park straight off the run, does a haggard 180 right past me into a switch ass over balls snowplow and i had to skip the jump to not run into him
i called him and his buddies out at the bottom of the run and they responded with "HE WAS HITTING IT SWITCH DUDE". its probably not even worth mentioning that its a 15 foot jump and the kid was probably windmilling fast enough to gain enough lift to make it to the knuckle despite his snowplow and oversized wind resistant clothes but I was still pretty bummed on it. they legitimately thought it was cool to cut everyone waiting to hit the jump and almost run into me because sponsor me jimmy was doing his first switch hit.
long story short I have started to make a point of calling people out for having bad park etiquette mostly because its how people get hurt. how did sponsor me jimmy know that someone didnt just wreck on that first jump when he was dropping in? wait your turn, make sure features are clear, cheer if people land shit, and the park is a better place for everyone.
Jul 28 2013 7:00PM 1 0
All times are Eastern (-4)