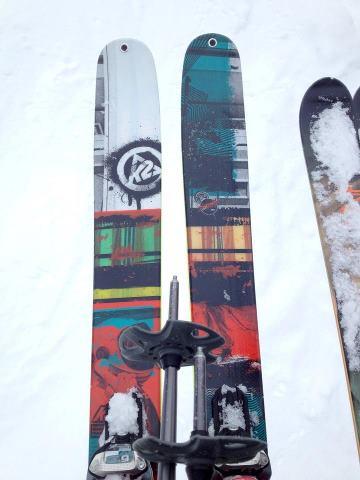 Take this all with a grain of salt, I only skied them for around an hour and this definitely isn't my type of ski. Despite this I felt I got a good sense of how they would perform in different conditions and I think a lot of you guys are looking at these for next year. I took them on two runs down West Bowl on Whistler, nice steep cornice, funnels into some trees, and then a cat track back; great mix of terrain. We've had a pretty meh winter for pow days, so conditions today were a few cm of new snow on wind and sun baked crust.

They are very rockered in the tip and tail, have a large dose of camber underfoot, and have a definite tapered shape. They Hand flex a lot softer than they ski, but not as smooth a flex as my bibby's, more like how a JJ or TST flex. My first impressions were how loose they skied, it took me a while to get them to set an edge on groomers, definitely suffered from hooking, deflection, and tip flap (detune would help with this). I thought they'd like getting air but coming from bibby's they really lacked pop and were weirdly unbalanced, very tip heavy, almost felt like I was going to land tip first in to the snow (obviously you could adjust for this, but this was a big surprise on my first few airs). They definitely preferred bouncing around in the trees (this was definitely the skis strong point) and handled moderately well on groomers once I was able to adjust.

Honestly, I really didn't like them, felt very dead and too loose, but I also much prefer a stiff 'carve' skis for crappy whistler conditions. I think that with a centre mount + detune, and these would be a great BC booter or 3d snow tree/play ski for some of you lighter guys who really like a loose ski, but want something a little more resort friendly than the pettitor. The only ski I can really compare these too (Bibby's are a totally different beast) are my friends '12 line sfb's, which I really enjoyed (granted they were also mounted centre); they had a much more consistent flex and definitely gripped better while still remaining just as playful in similar conditions.

"And for anyone who's curious. The shreditor 112 is probably the funnest k2 ski I've ever ski'd. Actually its the only k2 ive ever liked haha Definitely lighter than most k2s and is super buttery but stable. " (nyles)
Feb 18 2013 4:35AM 0 0

the mango chutney from SunVillains on Vimeo.

*Nefarious*
Posts: 1071 - Karma: 4,189
Karma: 4,189
Posts: 1071
Insane
I spent a lot of time skiing the 112's this spring and all summer, and I love em, especially in the park. I love the width and the rocker, they kick ass all over the mountain, and have that playful k2 feel. The more I broke these skis in the more I enjoyed them. They are super fun in the park, solid enough for big jumps but nice and buttery for... butters and other shenanigans. I'll probably be riding these all the time now, pretty sure they are gonna replace the Kung Fu in my quiver. FUN SKI, fo sho.
2ND half of this recent vid is all on the Shred 112

anematollahy
Posts: 18 - Karma: 66
Karma: 66
Posts: 18
Newb
Where have others mounted their bindings on these. I'm not a full on park skier by any means. I've got a pair of Fischer addicts that are mounted centre. Wandering if I should go for a -3cm mount or 0.

anematollahyWhere have others mounted their bindings on these. I'm not a full on park skier by any means. I've got a pair of Fischer addicts that are mounted centre. Wandering if I should go for a -3cm mount or 0.

Also wondering where to mount these for 70% all mountain, 30% park.