Puns
Posts: 2052 - Karma: 428
Karma: 428
Posts: 2052
Addict
That's fair, though at this point I would wonder why even refer to the religious texts (while they do have a lot of good info) when you can just make up your morals for yourself. Also while it's true that there are some generally accepted positive moral teaching in the bible, there are also many generally accepted negative teachings (so I've heard, but cannot give examples)
Oct 12 2012 9:53PM 0 0

joshua
Posts: 5046 - Karma: 1,278
Karma: 1,278
Posts: 5046
No Life
Instead of pointless bickering here, I'm just going to say take a look at some of William Lane Craig's articles, books, and debates if you want to see some real Christian apologetics. His work has had a huge impact on me for sure. 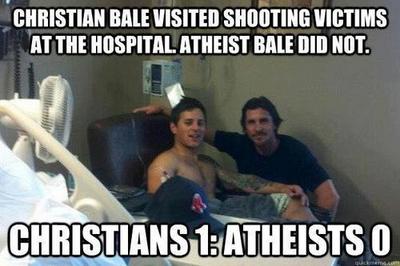 Ski_The_E
Posts: 1036 - Karma: 944
Karma: 944
Posts: 1036
Insane
Deism has no evidence supporting it. I listened to some of those podcasts and in the ones that I listened to he never states any actual evidence for god he just says different ways god could possibly fit into science. That being said it is impossible to disprove the idea of god, but it is very possible to disprove religious texts like the bible.
Oct 13 2012 10:00AM 0 0

I realize the existence of a God can never be proven. There will always be an element of faith involved. However there are some good arguements and logical reasons for believing in God, IMO. I'm curious what parts of the Bible you consider to have been disproven? Yes, certain interpretations of certain parts of the Bible have been essentially disproven, but overall the Bible has proven to be pretty historically accurate in most regards.
Oct 13 2012 11:12AM 0 0

Ski_The_E
Posts: 1036 - Karma: 944
Karma: 944
Posts: 1036
Insane
I didn't say the existence of god could never be proven. I said the existence of god could never be disproven. Im curious what specifically you think is a good argument or logical reasoning for believing in god. One part of the bible disproven by science is chapters 1 and 2 of Genesis. The creation story states that god created the heaven and the earth. This contradicts one of the most basic theories of science, the big bang. In chapter 2 the bible claims that god created man out of dust, along with every other creature on this world. Science has shown that animals were not created by god as stated in chapter 2, but instead started as single celled organisms in a "pool" of muck containing all necessary components of life. Also the bible claims that all language was merely created in the story of the tower of babel. It has been proven that languages did not miraculously appear, but evolved over time.
Oct 13 2012 11:56AM 0 0

_Garagely_
Posts: 1860 - Karma: 2,311
Karma: 2,311
Posts: 1860
Insane
I agree with the historical part. Jesus was an actual person that got crucified. But I do not believe that Jesus had magical powers and the existence god because I find it to be ridiculously unreasonable.

joshua
Posts: 5046 - Karma: 1,278
Karma: 1,278
Posts: 5046
No Life
Like I said, there are many different intrepretations of the Bible, and many Christians have no problem reconciling both modern science and their Christian faith. Its important to realize that a lot of biblical intrepretation boils down to how the original texts should be translated.

This idea of God creating over long periods of time is not new, and in fact dates back to even before the theory of evolution ever saw the light of day. In fact, Aristotle believed that God "created the world with potentencies that unfolded over time."

So yes, well some current intrepretations of Biblical text are very hard to defend in this day and age, it does not deal a death blow to Christianity.

Anyway, while we are on the topic of biblical evidence, this debate between William Lane Craig and John Shelby on the historical evidence for the resurrection of Christ is pretty interesting.
Oct 13 2012 12:22PM 0 0

Here it is, William Lane Craig vs. Bart D. Ehrman

casual
Posts: 6705 - Karma: 6,675
Karma: 6,675
Posts: 6705
No Life
In the last three months you've come from out of nowhere to run away with the "worst member" title. There's no way you have an IQ above 80. You literally routinely make the worst posts imaginable, I don't even look at people's icons, or names, but I read your posts (which are everywhere), I look left and I think, "fuck....again?".

It's time to take a break, lil guy. And, one last thing, you're a crazily conservative, "very religious" (in your words) spoiled teenager, for the love of god you hold, lose that idiotic rasta icon you goddamn clown shoe.

Amadeus.
Posts: 3050 - Karma: 382
Karma: 382
Posts: 3050
Addict
I really just can not grasp this argument. How can you say something that is supposed to be infallible and basically the word of god is subject to interpretation?

To me its basically saying: It doesn't matter how much the of the bible is proven to be wrong, or is immoral, or hateful, we are going to just "interpret" those things in ways which make them seem nice or not really intended to be literal, and just leave the good stuff in there.

If you really need a book to remind you whats right and wrong and think the Bible is an appropriate source for that just get the Jefferson Bible, The Life and Morals of Jesus of Nazareth. Its cuts all the supernatural BS out of it (miracles, divinity, resurrection etc.) because even in the 18th century people knew that was stupid.
Oct 13 2012 1:31PM 0 0

RedEyeTheJedi
Posts: 443 - Karma: 30
Karma: 30
Posts: 443
Ridiculous
Haha this shit was good. I have been to a few churches and once you go south shit starts getting more ignorant. They start preaching against science and talk about how athiests are thier enemy trying to defame the word of god.

First of all, the underlying THEME of the first book of Genesis can't be scientifically proven or disproven.
No test has ever been found that can tell the difference between a universe created by God, and one that appeared without Him. Only certain interpretations of Genesis can be disproven.
What if I asked you "If the story of the prodigal son didn't really happen, then is the whole Bible wrong?" Of course not! Remember that the Bible is a collection of both stories and historical accounts. Because one part is a figurative story does not make the entire Bible so. Even if it did, the underlying message of the Bible would remain.

I see you mentioned the resurrection. If you would like to see an excellent debate between two Hebrew scholars on the subject, check out my other post.
Oct 13 2012 1:44PM 0 0

Amadeus.
Posts: 3050 - Karma: 382
Karma: 382
Posts: 3050
Addict
Although that is a great movie I would suggest that if anyone wants to educate themselves on the atheist end of things they should read the God Delusion by Richard Dawkins or god is Not Great by Christopher Hitchens.

Amadeus.
Posts: 3050 - Karma: 382
Karma: 382
Posts: 3050
Addict
yeah it was great because Bill Maher didn't even make a joke throughout the whole thing. The joke was peoples ridiculous response.

This is my favorite part, best priest ever.

yourthemannowdog
Posts: 4541 - Karma: 313
Karma: 313
Posts: 4541
No Life
That does not tell me why he talks about communism so much. Names are not anayltical judgments a priori. If his name had any value it would further draw my interest into his obsession with Communism.


Are you stating that he likes communism because his name is a reference to a communist leader? Once again, not analytical a priori
Oct 13 2012 10:05PM 0 0