PlaygroundRapist
Posts: 1307 - Karma: 26
Karma: 26
Posts: 1307
Insane
I like how that started out as a reasonable civilized discussion with some incredibly wack arguments.
And then suddenly the guy goes in rage mode, starts pushing, grabs the camera, hits the other kid with a board and subsequently breaks the board before throwing one of the pieces at him.
Indeed the kids were wrong for trespassing. But that doesn't warrant a reaction like that.
Jul 30 2012 2:49AM 0 0

muFFn
Posts: 1040 - Karma: 72
Karma: 72
Posts: 1040
Insane
Don't get me wrong, those kids were obviously wrong and were breaking the law, that guard should have been the bigger man and just walked them out, issue a warning and/or threat of police, and get on with his job. As much as I hate sarcastic dilholes as much as the other guy, he should have been the bigger man.
Jul 30 2012 3:50AM 0 0

youngdtay
Posts: 3122 - Karma: -120
Karma: -120
Posts: 3122
Addict
Oh well, they were trespassing on private property and getting belligerent with a man who is only doing his job. If they would've just been a little more polite, maybe he would've given the kid his skate back. I don't really think what the security guard did was all that wack, except for the fact that he ended up hitting the kid with the skateboard, but it's not like he was mortally wounded, so even that's not that bad.
Jul 30 2012 5:02AM 0 0

if you're gonna skate somewhere don't do it in the national stadium that's just asking for trouble, if the guards didn't do their job and just turned a blind eye who's to say they haven't planted a bomb?

Cannaburner
Posts: 993 - Karma: 664
Karma: 664
Posts: 993
Insane
this guy better get fired or ima post it on the main page for you, thats bull shit that he hit the kid with the board. and fuck these stupid fucking nsg comments saying "well they shouldnt be there what can they expect. no go fuck yourself nsg. the kids were just skating and this ass hole was a douche bag about it. im sorry to hear about your board and i hope that ass hole gets what he deserves.
Jul 30 2012 10:24AM 0 0

The number of places you cannot skate is a whole lot smaller than those that you can skate.

.AR6rider.
Posts: 15968 - Karma: 8,709
Karma: 8,709
Posts: 15968
Post Whore
I always love these kinds of threads. It's funny to see the kids on NS defend the dumbfuck kids in the video who were clearly in the wrong, then instead of just accepting the consequences, they badger the fuck out of the security guard to "gimme moy skatebohd beck, mate," getting in his face. Sure, the guy shouldn't have hit the kid with the board, but those kids need to realize that there are consequences to being a fucking idiot. What do you think would happen if a bunch of skaterats in America got caught skateboarding in a huge, closed arena? They'd get a pat on the ass and politely asked to leave?
Jul 30 2012 12:52PM 0 0

The propper thing for the guard to do would have been to issue them a warning, call the police and keep security camera pictures of them on file.

instead he runs at them, steals property, attacks a minor and breaks this propperty.

he was even on the phone with the police and he decided to hang up and get his own justice.

your an idiot if you think theyre making a big deal.


Do you ski urban? I hope you do because then you would be a hypocrite. When skiing urban I know I have the possibility of getting kicked out. its part of the game, I try to be respectfull when it happens. but every so often you get situations like this where the person kicking you out goes overboard and that is not acceptable and is something to react about.
Jul 30 2012 12:58PM 0 0

ShreddAZ
Posts: 2548 - Karma: 40
Karma: 40
Posts: 2548
Addict
Guys seriously? I 100% agree with ElGato. The kids were obviously running from him and not treating him with respect so when they are too stupid to not be able to outrun a middle aged man, they whip out their camera and act like angels. They obviously were in the wrong and deserve their board broken. For the kid trying to make the house argument, that was the stupidest thing you could say. It hurt your credibility.
"If my front door is open of course it's not trespassing"
Fucking retard. and then he is like if you came into my house and took something I would expect you to give it back. Except this situation THEY CAME INTO HIS "HOUSE".
God I hate stupid kids.
Jul 30 2012 4:57PM 0 0

jblaski
Posts: 5473 - Karma: -236
Karma: -236
Posts: 5473
No Life
I'd give a high-5 to that guard if I could. If more of them did this, kids would think twice about getting up in some strangers face and trying to grab their board back from them. I doubt they would go trespass into places they shouldn't be if they were concerned that they could possibly take a baseball swing to the chest from a skateboard. It's called having respect for authority and your elders. I'm sure these kids learned their lesson, and won't be back there.
Jul 30 2012 5:03PM 0 0

ShreddAZ
Posts: 2548 - Karma: 40
Karma: 40
Posts: 2548
Addict
I actually didn't, some kid got upset with the quality of pants even though i showed him detailed pictures and then a package was lost with another
both were refunded and settled

SIT DOWN I'M NOT A DUDE!  haha gets me everytime. 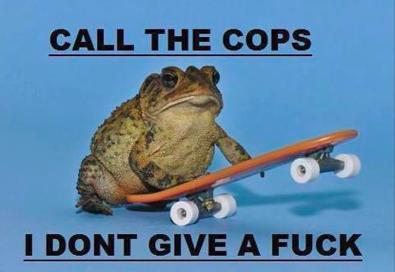