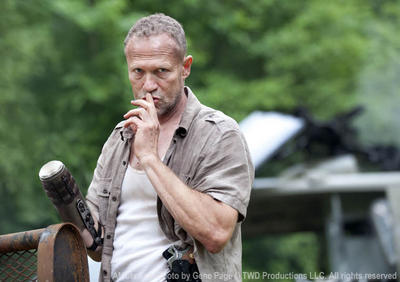 And of course this lovely lady... 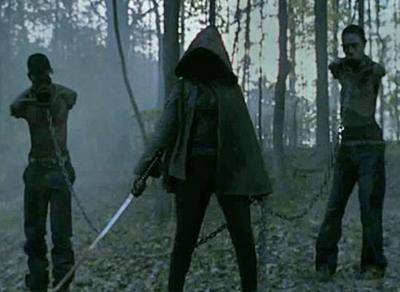 I think it's going to be interesting to see more human vs human conflict but I seriously hope they keep the number of zombies per episode much higher than the second season. Just because the people are now fighting each other it doesn't mean that you can forget about the reason this show is so good to begin with...dead people!
Post discussion, pics, etc.
STOKED FOR OCTOBER
Jul 28 2012 5:53AM 127 36

kungfusteeze
Posts: 700 - Karma: 47
Karma: 47
Posts: 700
Ridiculous
This. This show has been going in such a good direction, and I like it. There's no point following up on the CDC/State of the World story arch if you don't have character develpoment. Then its just an empty story, and it wouldn't matter who lived or died.
Mar 4 2013 1:27AM 0 0

grown-ninja
Posts: 3031 - Karma: 175
Karma: 175
Posts: 3031
Addict
Episode was sick, if you haven't watched it since the begining I could see how you were confused, I think next weeks is gonna be just pushing the battle off, good episode in my opinion though. On another note, Vikings on history channel is sick too
Mar 4 2013 8:45AM 0 0

theBearJew
Posts: 10951 - Karma: 15,599
Karma: 15,599
Posts: 10951
Crazy Fool
That would be cool as fuck. A small 10 minute cut out of her life before the outbreak. She did mention her boyfriend which now you assume that one of those zombies she carried around as protection were her boyfriend and someone else, maybe brother?

Also I agree that the show needs to have character development and all that, it just gets frustrating cause they have been building the Woodbury invasion for 3 episodes now and it seems like they just continue to build.

Here's what I think is going to happen with Morgan.. They are going to attack Woodbury and eventually lead the fight to Morgan's town because of all of the booby-traps and spikes. They would have the advantage there.

I am just hoping that the invasion/attack is not the last episode and instead the attack happens, Rick's group is forced to find a new location for the next season and they are either back on the road or just working on another place... I feel like not much more can happen with the prison/Woodbury.
Mar 4 2013 9:26AM 0 0

Ski_the_east01
Posts: 5203 - Karma: 2,302
Karma: 2,302
Posts: 5203
No Life
It's not boring because of the lack of zombie killing. The last couple episodes have had some bad ass zombie scenes.
It's the pound it down the audiences throats character development. When they continue to develop daryl with his daddy issues and childhood problems a couple episodes ago. We love darryl already, you don't need to keep drowning us in his development
I recently watched the first season over and if you compare it to season three it has changed sooo much. I know they swapped writers but the way they focus on these characters and their relationships is like an episode of twilight and not what the TV series started out as
The one thing I did appreciate is the michonne development in this episode, looks like she'll finally be a part of the group instead of just an outsider
There are only 4 episodes left in this season and not much has happened especially since the break except for way too much character development
Mar 4 2013 9:30AM 0 0

yuck
Posts: 8384 - Karma: 2,083
Karma: 2,083
Posts: 8384
Crazy Fool
all yall just need to watch the show for what it is, which is a zombie drama. so its gonna get a little soapy. my moms friends from church watch this show and they are 50 year old christian ladies so clearly the writers are trying to get mass appeal with the drama aspect but the zombies keep the teenage dudes around so clearly they hit the nail on the head.
Mar 4 2013 10:32AM 0 0

kungfusteeze
Posts: 700 - Karma: 47
Karma: 47
Posts: 700
Ridiculous
Its nothing like Twilight. And character development is good for the show. Also, plenty of shit has happened. Introducing The Govenor. The assault on Woodbury to save Glen and Maggie (who were part of crazy shit as well), and the war between the Prison and Woodbury starting, plus seeing Morgan last night... Those were all huge events.
Mar 4 2013 3:42PM 0 0

Tygaaa
Posts: 492 - Karma: 137
Karma: 137
Posts: 492
Ridiculous
I really hope Morgan does somehow snap out of his condition and go back to Rick cause it would be a huge help. But if anyone watched the talking dead after I think Morgan might have just been a sign in the series so he might not be brought back up. But I'm thinking if he does come back up they're ganna have to go back to him.
Mar 4 2013 4:31PM 0 0

alvy.
Posts: 2134 - Karma: 377
Karma: 377
Posts: 2134
Addict
I'm kind of torn about this whole Morgan situation. I don't think the writers would bring him back for just one episode, so part of me thinks that he will come to his senses and join the group.

But this whole getting "cleared" thing is fishy. He has it written all over his wall, and when he denies Rick's offer to come back he says no, I need to "clear".

I can see this as either he needs to literally clear his head and get over his families demise in solitude, or he is going to kill himself. I can see it both ways. Any thoughts?
Mar 4 2013 7:00PM 0 0

RimJobber
Posts: 3313 - Karma: 10,052
Karma: 10,052
Posts: 3313
Addict
I dont think its the end of Morgan, but I feel like he is too crazy and emotionally unstable to stay. I think they will bring closure to his character this season. Which kinda sucks, that was some damn fine acting he did last episode. I thought it was the best for a non-group part. 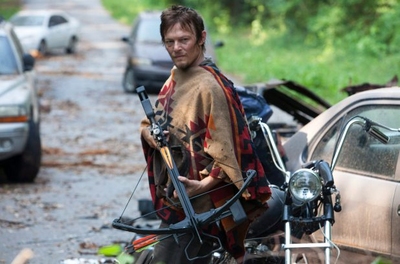 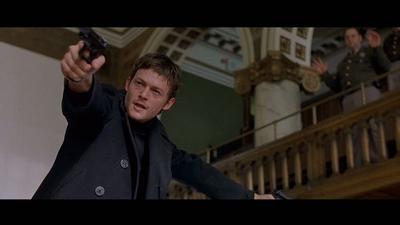 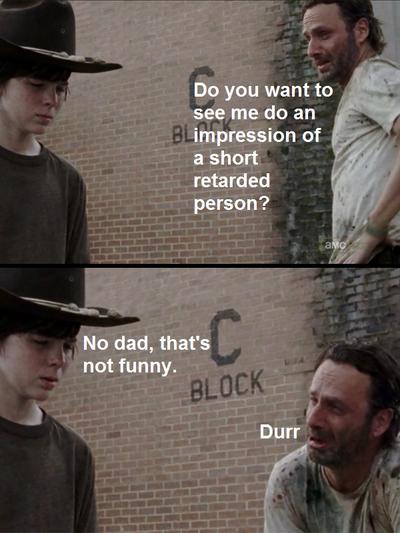 but srsly.
Im so fucking addicted.
Cringed hard with that C Section

Show is so awesome. 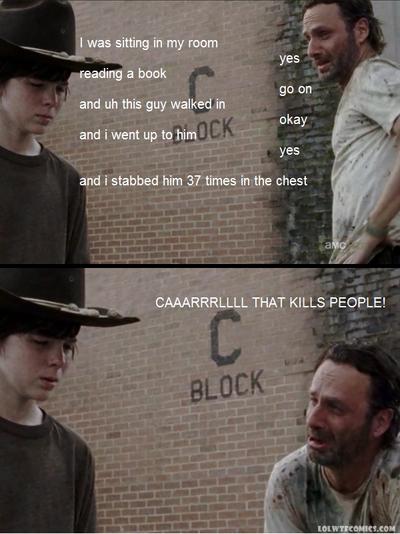 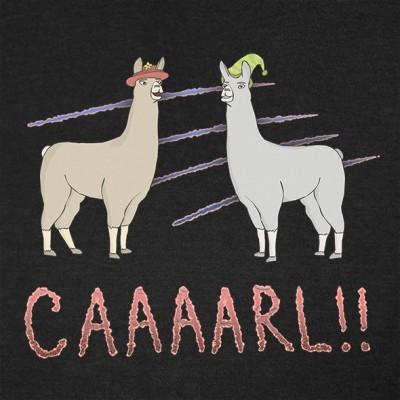 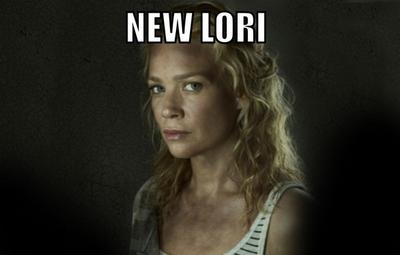 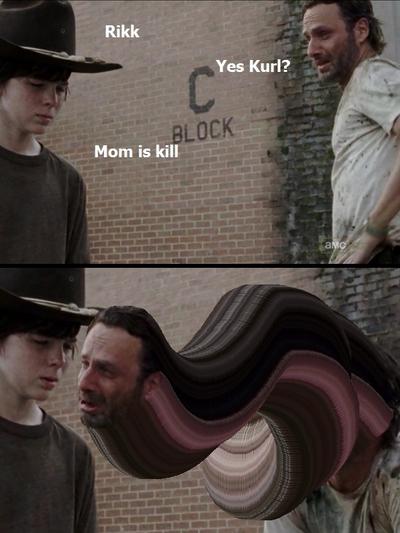 grown-ninja
Posts: 3031 - Karma: 175
Karma: 175
Posts: 3031
Addict
I was all for character development the last few episodes but this is bs, this seasons sucked so far, the firt few episodes...ok but not any more...shit better go off the next few minutes. What's up with all the commercials this season too. Seems like every 7 minutes theres a brick of 5 minutes commercials
Mar 10 2013 9:50PM 0 0

Barefootin_Fiend
Posts: 7618 - Karma: 4,705
Karma: 4,705
Posts: 7618
Crazy Fool
i heard that....
it looks like shit's about to pop off next episode. and it's about fucking time that it did. they've dragged this whole woodbury thing on far too long. i swear to god if they do two more building episodes and then have the last episode be the epic battle, i'm going to be pissed off. even my girl commented tonight that the show was becoming kind of slow....and she's not even remotely an action junkie like i am.
Mar 10 2013 10:38PM 0 0

grown-ninja
Posts: 3031 - Karma: 175
Karma: 175
Posts: 3031
Addict
If you read all by posts I've defended this season 100% up until this episode, I'm all for character development, the show can't be 100% about killing but the last 3 episodes outside of a few parts of last week have been really shitty. If they drag this out any longer I might stop watching. Many the lack of action cuppled with my disappointment over the past few weeks just make the episode seem like they're more commercials
Mar 10 2013 11:52PM 0 0

Ski_the_east01
Posts: 5203 - Karma: 2,302
Karma: 2,302
Posts: 5203
No Life
Another week another shit boring episodes...the same thing will happen next week too, did you see the previews?
Whoever is still defending this show is a naive fan boy. Don't give me the "character development" garbage anymore, they are filling these episodes because they have nothing to do until the final two episodes of the season were they will have some sort of royal rumble
Next week will be the same thing, the preview showed all of them just running around prepping and arguing about the upcoming war...don't expect anything more from this show
Mar 11 2013 9:04AM 0 1
All times are Eastern (-5)