"Will the Westboro Church (WBC) picket happen at the Aurora memorial on July 22? Not if one Reddit user gets enough people to "make a giant wall of people" to stop dirtbag Fred Phelps's massive group of haters to upset the memorial scheduled to happen at 6:30 p.m. at Aurora City Hall on Sunday.

Word spread quickly about the Phelps and his group's plans to upset the memorial and there is one Reddit user who wants Westboro stopped. User RKstarfox to submitted the following post to Reddit on Saturday that now has over 4,500 comments:

"So the Westboro Baptist Church is planning on picketing the Memorial for the victims of the Aurora shooting tomorrow. Who is coming with me to make a giant wall of people that will keep them from getting anywhere near it?"

Those who want to stop WBC's picketing at the Aurora memorial are up against protesters like @WBCjae who tweeted:

"We were JUST in CO & now another trip back! #Excited The #Aurora#theatershooting memorial on Sunday - here we come! #ThankGodForTheShooter"

Another WBC supporter, @AnarchoAnon tweeted a map of the Aurora memorial area and a message for picketers:

"Tomorrow we'll shield the #TheaterShooting memorial from the WBC. 5pm in front of the Aurora Municipal Center."

Will the Westboro picket actually happen? There is a lot of uproar about it, but Reddit user "tylahrand" thinks there's a "small percentage" of a chance:

"Just to let you know how the WBC works, they pretty much say they are attending every funeral that either is for a service member or that makes big news across the country. They actually picket at a very small percentage of the funerals they 'say' they are going to attend. When and if they actually plan to attend, they always contact the law enforcement for that area and request protection, and that is how we know when they will actually show up."

If the WBC protesters do show up, there will be people there to meet them and hopefully stop this group of demented people who think "God is Your Enemy."

Not only are there over 4500 people commenting on Reddit about Westboro Church's planned protest, many of them are planning to block the picket if it happens in Aurora on Sunday. The anti-Westboro rage has spread to Twitter as well.

WBC makes me sick. Take your hate elsewhere. We're in a time of mourning, we don't need you making all of this worse. - @suuperunknown

Hopefully, there will be a large enough group will be in Aurora to block the group for upsetting people who are grieving over the loss of their loved ones just days after James Holmes gunned down innocent people in the Cinema 16 Theaters during the "Dark Knight Rises" premier.

The Westboro Baptist Church is an American, Independent Baptist church headed by Fred Phelps. It is known for its protests against homosexuality, the picketing of funerals of American servicemen and desecrating the American flag. This "church" uses the website address: godhatesfags.com.

There is word on Twitter that the group may be in green vans, although they have been known to show up in vans in other colors including red or blue.

WBC had to purchase a new lime green bus to get all of us to Colorado for all that raging against God. #SquallFest#GodSentTheShooter - @dearshirley

Dinner420
Posts: 105 - Karma: 47
Karma: 47
Posts: 105
Pro
Why would westborow picket this? These guys are just assholes looking for attention. I hope they all get what they deserve a good ass beating.

Dinner420
Posts: 105 - Karma: 47
Karma: 47
Posts: 105
Pro
It a memorial not a funeral am I right? Still it shouldn't happen there and I never thought it should. I'm talking about in general they all deserve to get their asses kicked. People should go to their church one day and disrupt them and beat all their asses and knock some god damn sense into their skulls. 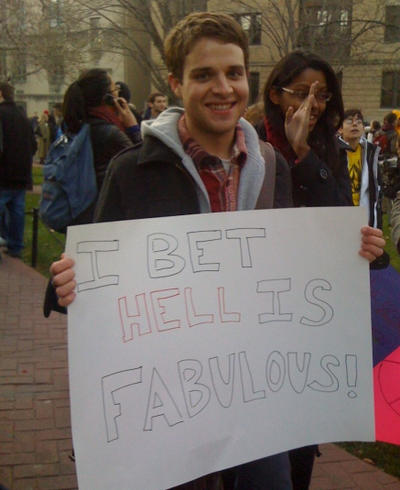 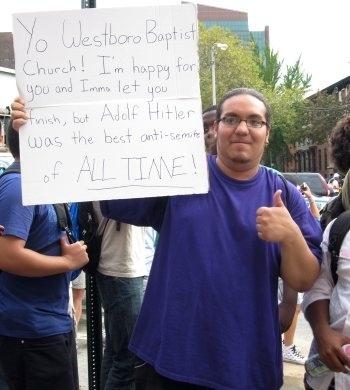 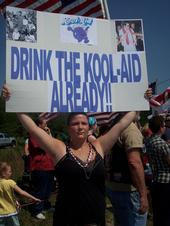 smooticus
Posts: 1798 - Karma: 27
Karma: 27
Posts: 1798
Insane
Its official, i think I am the last person to not have a twitter account. Also westboro is such obvious troll, it really grinds my gears that the media even acknowledges them. I wish everyone c9uld collectively just pretend they dont exist.
Jul 22 2012 6:11PM 0 0

Dinner420
Posts: 105 - Karma: 47
Karma: 47
Posts: 105
Pro
They are not even worth arguing with. I have seen many videos and it seems like they are completely closed minded and not listening to anyone who disagrees with them. They make them selves look like idiots publicly so they are doing them selves no good being in the media. They go too far like going to funerals and memorials like this and people need to stop them. It is completely rude and inconsiderate to do this shit and I would be happy to see them go to the wrong neighborhood and get their shit stomped.

Some day they will get what is coming to them

these people piss me the fuck off how can you even call yourself religous when your a hatefull asshole. i thought the whole point of religion was to be accepting and tolerant of others. seriously if theres one group of people i dislike its the fucking juggalos and if i had to choose to talk to one of these morons or a whole group of juggalos well....i guess im down wit da clown then