heavy_lettuce
Posts: 210 - Karma: 82
Karma: 82
Posts: 210
Loner
So a couple nights ago, my buddy who is only 17 got fucked. He got pulled of for "swerving" around midnight coming home from Mc Dicks. His truck smelled like nug because he had smoked in it earlier. When he got pulled over, he was completely sober. So the cop could smell shit and asked to search his truck. He ended up finding 3 homemade bowls (which i helped make) and a brand new piece that he used once. He then got taken out of the truck and had to do all the sobriety tests. After doing some he just straight up asked to get breathalized. He blew zero's. Even still, the cops handcuffed him and brought him down to the station where they called some special asshole to do even more sobriety tests on him. He asked to call his mom multiple times but they would not let him. An hour and a half later, he got cuffed again and taken to the local hospital for blood testing. He finally got released and had his mom pick him up at 3 in the morning on a work night. He has to wait for his blood shit to get back to see whats going to happen. He met with an attorney yesterday and she said there is a possibility of going to jail because he is getting charged as an adult and or getting charged with a DUI and losing his license and paying a huge fine.
To me this seems like mad bullshit. Every other case i have been in or seen, they take your shit and you might get diversion or they let you go. Anyone ever had something like this happen?
We live in vermont. And once again he is only 17.
Jul 13 2012 8:15PM 0 0

Yeezy
Posts: 1652 - Karma: 205
Karma: 205
Posts: 1652
Insane
Your title made me think that it was gonna be another Bullshit rant about skateboarders or something but the way you described it really seems like the kid got fucked over. Cops do exercise their power too much
Jul 13 2012 8:19PM 0 0

police searched and found the bowls.

heavy_lettuce
Posts: 210 - Karma: 82
Karma: 82
Posts: 210
Loner
he wasn't under the influence when he got pulled over. And im not trying to say that he should have just got a verbal warning and sent on his way. Getting searched was legit but being 17, not being aloud to call his parents and everything else that happened to him, seems like a little much to me.
Jul 13 2012 8:30PM 0 0

Charlie_Kelly
Posts: 11166 - Karma: 8,356
Karma: 8,356
Posts: 11166
Crazy Fool
Dude, honestly you are being a bitch. Your friend blazed, allowing his car to smell like herb. Thats 100% his fault,not the cops. The fact that he got drug tested is perfectly reasonable as well. You kids should be up for the Darwin awards the way the way you smoke weed and think that when caught the police should do nothing about it.
Jul 13 2012 8:45PM 0 0

heavy_lettuce
Posts: 210 - Karma: 82
Karma: 82
Posts: 210
Loner
i never said that he shouldn't have gotten in trouble. I actually said the opposite. I agree with him getting his car searched. I would have agreed if they just straight up gave him diversion. I dont agree with how the hauled him all over the place in cuffs, did sobriety tests for over an hour, and brought him to the hospital for blood testing. And i was just seeing if something like this has ever happened to anyone else. I dont agree with what happened, thats my opinion. I was telling a story, not sure how that makes me a bitch.
Jul 13 2012 8:54PM 0 0

Joebin
Posts: 1664 - Karma: 872
Karma: 872
Posts: 1664
Insane
When you're 17 you are not given the all the legal rights of an adult, which most likely explains the whole phone call thing. And they did all the blood work because he was pulled over for swerving, an obvious sign of intoxication, several pieces of paraphernalia were found in his car and it smelt of ganj. Had he not been swerving he would have probably not gone through all that.
Jul 13 2012 8:54PM 0 0

heavy_lettuce
Posts: 210 - Karma: 82
Karma: 82
Posts: 210
Loner
yeah i mean swerving probably wasn't the best thing to get pulled over for. He thought it was his friend tailgating him but ended up being some cop. And since he isn't 18, i thought you had to do pretty much everything through your parents. Not an adult yet?
Jul 13 2012 8:57PM 0 0

AndI called you a bitch because,like fujarome said, your thread title was "fuck the police" when the cop did everything he was supposed to in a situation like that. I dont know why kids get so pissed at cops when they are clearly in the wrong and the police officer is just doing his/her job...
Jul 13 2012 9:03PM 0 0

AndI called you a bitch because,like fujarome said, your thread title was "fuck the police" when the cop did everything he was supposed to in a situation like that. I dont know why kids get so pissed at cops when they are clearly in the wrong and the police officer is just doing his/her job...
Jul 13 2012 9:03PM 0 0 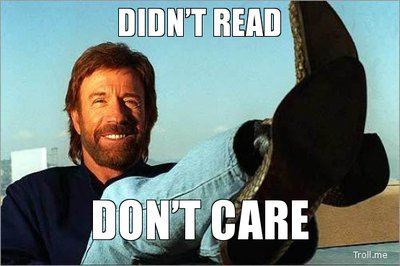 Fuck you for disrespecting the law and thinking that someone who broke the law should get off free. The police are here to protect us and enforce the laws, they didn't make them so why be mad?
Jul 13 2012 9:10PM 0 0

Squeenerd
Posts: 726 - Karma: 158
Karma: 158
Posts: 726
Ridiculous
your friend had illegal substances and paraphenalia in his car. Keyword: ILLEGAL..
I'll tell you whats stupid. I almost went to court for driving over some grass. The park lock up guys came by at closing, didn't warn us they were locking the gates, and left. So all our cars were locked in the parking lot. So like any normal human beings, we decided to drive over a small (8 foot) long patch of grass and get on the main road. Some dude called the police. What else were we supposed to do?
Jul 13 2012 9:18PM 0 0

Your friend is a dumbass, the blood tests will confirm or negate whether or not he was under the influence of a narcotic while driving. If he was then it's bye bye licence and low insurance rates.

I love how this is a fuck the police situation. Ya fuck those police for doing their job, fuck them because you don't agree. Jesus christ.

Your friend, as a young offender MUST have been immediately informed of his charge and his rights which INCLUDE the right to immediately contact an adult and/or lawyer. If he was not allowed to do so this charge will be thrown out immediately if the officer cannot prove why he did not afford this right.

actually the fact that a parent picked him up at 3am confirms that he wasn't actually arrested. If you are placed under arrest, you're there until bail is posted/you're put in front of a judge when the courts open.
Jul 13 2012 9:37PM 0 0

I'm not familiar with american law. So you can be detained and tested without being arrested or charged?

Either way as a young offender you can't really do shit without having a parent/guardian/lawyer present....

fujarome
Posts: 8626 - Karma: 1,502
Karma: 1,502
Posts: 8626
Crazy Fool
i don't know the specifics of it entirely, but I know they can detain you for a certain period while they investigate to determine whether a crime was actually committed. So being that this guy was never booked, printed, photographed and put in a cell, it doesn't sound like he was actually arrested.
Jul 13 2012 9:52PM 0 0

Piste.Off
Posts: 11586 - Karma: 1,861
Karma: 1,861
Posts: 11586
Crazy Fool
You can get a DUI for driving high, not just drunk. Your friend wasn't just getting blood tested, he was getting drug tested. The fact that your friend was swerving is a clear sign to the cops of intoxication due to drugs or alcohol, whether or not he actually was high/drunk. If your friend wasn't being an idiot and swerving and if his car didn't smell like weed, I'm sure the cop would have handled things much differently. The cop's job is to protect people on the road. When he pulls over a swerving car that reeks of drugs, of course he's going to treat your friend like he's under the influence. Try to think rationally before you post stupid shit about how the police screwed your friend.
Jul 13 2012 10:05PM 0 0

heavy_lettuce
Posts: 210 - Karma: 82
Karma: 82
Posts: 210
Loner
i mean i wasn't really saying, or meant, that he should have gotten away with everything. He had illegal shit. I was just curious to see if this has ever happened to anyone else. Has never happened to anyone else i know. And i guess the title leaves the wrong impression. I know they were doing their job.
Jul 14 2012 12:47PM 0 0
All times are Eastern (-4)