Yeezus
Posts: 3335 - Karma: 457
Karma: 457
Posts: 3335
Addict
Basically, I took my friend flexdeck longboard. The small one whatever it is, & I basically have fallen in love with riding this thing.
So, I want to get into longboarding now but don't know absolute shit about it. I'm looking for something that I can just ride around the neighborhood or city with. I don't want it to be big either. Also will need trucks & wheels & bearings so I need recommendations on that too. Lastly, links & good sites would be helpful too.

Get a shortboard? or a cruiser but everyone is getting those now...

http://www.bamboosk8.com/ if you like flex this might intrest you. you could get like a loaded aswell but there much more pricey and definetly not a board a beginner would get.


Honey makes really nice decks. They have a lot of shorter cruiser models, and look fantastic. Im on mobile so no links, but i will when i get home. They are pricey though
Jul 9 2012 8:06PM 0 0

but heres two sites that are good to look for gear

But seriously, OP, get the Landyachtz Drop Carve 36 or the Earthwing Belly Carver. Both are much more affordable than Loaded boards, and 10x more quality in every way. I have owned both of these and they are both phenomenal decks. I now have a 2012 Wolfshark since I got into the DH/Freeride scene about a year and a half ago.

For trucks, I will vouch for Paris for strictly cruising/commuting. If you want to start sliding get Caliber 50 cals.

For wheels, get Abec 11 Classic thane ZigZags or Flashbacks. Very smooth rolling wheels, on the cheaper end of the spectrum, and will slide amzingly if you want to get into that later on.

Gypsy_Skier
Posts: 2663 - Karma: 5,202
Karma: 5,202
Posts: 2663
Addict
I understand the loaded hate but aint nothing wrong with Otngs haha. and as for the landyachtz... unles OP is gonna me bombing hills up in the mountans or travelling cross-country by board, getting such an expensive/heavy board would be near useless. there's nothing more annoying then having a heavy board. not smt you think of before you get one, but definetely smt you notice. thats why i useally ride Loaded or Orginal Skateboards boards, its cause they are legit lightweight sliding machines. but not the Tan Tien, that board si a waist of 328$, straight up. Dervish <3
Jul 10 2012 5:31AM 0 0

avocado.
Posts: 262 - Karma: 247
Karma: 247
Posts: 262
Loner
otang actually dissapointed me very much. i got durians 83 for first wheels. they slide like crap-noisy as hell and slooooow. a shortest slide will kill the speed in a second, but not in a good way. get flashbacks(from abec11) or something else in the 70 mm 80a range. it will be great for cruising, and when you get to sliding youll see the full potential. paris trucks are pretty weak, i would reccomend bears or randals for beginner, or cals. first board doesnt matter as you will find out what style of riding you want to progress into. hope this helps you. stay away from fancy companies such as loaded-their boards are great , but expensive and not suited for beginners, in shape and price. lok at earthwing, landyachtz, or even bustin for a beginner board.
Jul 10 2012 9:46AM 0 0

asfdfads
Posts: 1010 - Karma: 274
Karma: 274
Posts: 1010
Insane
just my two cents here, i purchased and rode an Arbor "crusing" board, rode it for 4 or 5 months and loved it, then progressed to where i wanted to freeride a bit more, and my cruising board just wasnt right for it. maybe buy something in-between? i have a landyachtz switchblade, and i love loosening up the trucks and carving around town. but i also love laying down some dh runs and slides. just my thoughts!

sparknotes-maybe consider a freeride/carve board instead of a crusing specific board. enjoy man!

will_powder
Posts: 3194 - Karma: 5,419
Karma: 5,419
Posts: 3194
Addict
This is honestly terrible advice. A Landyachtz/rayne/earthwing is going to be no more than one pound heavier, and 10 times more durable and reliable than your "bamboo8" BS.

Don't cheap out on this purchase, pay the extra 20 bucks and get something actually worth using.

But if you're just getting into the longboarding scene and you want something decent/cheap that fits you I would just go to a local skate shop, or Zumiez. Go in, look at all the boards, try them out. I got my first longbaord at Zumiez when I was in the same situation as you, and I defintiely got a great first board for a decent price to see if it was something I was really into.

Good luck finding something right for you, and I hope you get as into it as I did!

Karkoskier
Posts: 2931 - Karma: 3,890
Karma: 3,890
Posts: 2931
Addict
Unfortunately Zumiez is the only local skateshop near me and it's an hour away ]: But if you have the option I'd definitely check out what the skateshops have first.

Ric.
Posts: 708 - Karma: 362
Karma: 362
Posts: 708
Ridiculous
Don't buy loaded. Everyone has their boards and their expensive. Get a Bustin Maestro. You can customize the graphic which is sick an you can make it a complete on their site. I have one and it's camber is slightly forward so the flex is super nice. You can get it in a 7 ply or an 8 ply so it suits you weight needs. I love mine and its great. Check it out here:
http://www.bustinboards.com/v/bustin_longboards_nyc_maestro_longboard.asp
Jul 10 2012 9:00PM 0 0

Companies to stay away from IMHO: Loaded, Original, Bustin.

MY REASONING FOR LOADED: The company overprices their products and sells them by marketing them till the cows come home. The boards they make should be $50 less than they're selling them for. Sure, their light. But 1 layer of bamboo and some fiberglass won't survive running into a curb after you fall. Also, when riders ride Loaded boards in their youtube videos, they are marketing for the board. Those riders have immense amounts of skill and could do all of the things in their videos on a 2x4. Sparknotes: Overpriced, arguably false advertising, awful durability.

MY REASONING FOR ORIGINAL: The people that run Original skateboards are Jackasses. They travel around and skate spots greatly valued by local skaters. They then film it and advertise the location to the world. How would you feel if you had a bunch of random skaters showing up at your favorite slide spot, or DH run, or anything like that. Also, they advertise their products all as boards that can do absolutely EVERYTHING. They recommended pintails for freeride/DH when I was just getting into longboarding and emailed them, asking questions. I then did some research and found that they mislead me. I was a little relieved when they came out with the Freeride series though. However, my friend purchased one and it delamed, split, and cracked in one day of sliding. No curbs or anything. Inferior durability to Loaded.

Karkoskier
Posts: 2931 - Karma: 3,890
Karma: 3,890
Posts: 2931
Addict
I skated a place in Syracuse just like that! It was a really fun park, kinda funny to be skating with everyone in the mall walking by. haha but that really sucks it's closing ]:

Gypsy_Skier
Posts: 2663 - Karma: 5,202
Karma: 5,202
Posts: 2663
Addict
Ok man i dont know how long you've been in the longboarding scene, but probably not very long. you cant just hate on a company cos its doing well. i have had my dervish for nearly 4 years now and its holding up great, and i right the shit out of it.
Loaded wasnt always the huge company it is now, it started small, local and these guys were lucky enough to make it big. 6-7 years ago, they were nothing. Armada is the same kind of company, its just grown from something small but you cant take away the fact that it still makes quality products. And as far as the riders go, they were with the company from the very beginning, like the 2 Adams. A company isnt gonna release a promotional video featuring riders who cant ride for shit either... Every company needs some sort of marketing strategy, and you definetly cant hate on loaded for theirs. There customer service is the same. i remeber when i ordered my board, they forgot a pair of bearings, so i called and they were directly like "sorry dude, will get on that now. whats your adress?". 3 days later i had a shit ton of stickers and 3 pairs of bearings in the mail. I only needed one.
Loaded is definetly a good company and good to see they've gotten so big. Its a good product and thats why they do well. (except for the tan tien and the fish imo, sorry ben haha)
Jul 11 2012 12:42PM 0 0

Forcillo
Posts: 3801 - Karma: 3,573
Karma: 3,573
Posts: 3801
Addict
I didn't say that Loaded wasn't a well-built company, I just said that their marketing strategy is a little misleading, and that their boards were overpriced and not very durable. The company is pretty legit, but I'm not a fan of their products and don't recommend them. There are many other, more affordable options that serve the same purposes.

Gypsy_Skier
Posts: 2663 - Karma: 5,202
Karma: 5,202
Posts: 2663
Addict
aight well just difference of opinions then i guess. and the banghra doesnt is like nothing next to the dancer imo. that board was magical, always regreted not getting one, looked so fun.

Karkoskier
Posts: 2931 - Karma: 3,890
Karma: 3,890
Posts: 2931
Addict
Hills, Tricks, and cruising my Tan Tien get's the job done! I've owned the Salomon suspect skis too, and yes they were horrible(Unridable after 3 days), but I would never think of comparing a Tan Tien's quality to them. haha

chicken
Posts: 6820 - Karma: 2,085
Karma: 2,085
Posts: 6820
No Life
that's rediculous to say though. Obvioulsy you aren't gonna bomb massive hills on a tan tein but that's not what it's made for. It's like a pair of all mountain skis. Sure there are better boards for all types of situations but it's still a fairly well rounded board.

I bought mine when it first came out because insurance was paying for it and I think it's a pretty fun board still. I mostly ride my penny now for getting around town though so I might sell it and get a better board for actualy riding (like 10% of the time I skateboard).

It's funny because I bought both the penny and the tan tein when they first came out just because I was stoked on them and now I look like i'm just trying to be trendy haha.
Jul 11 2012 8:22PM 0 0 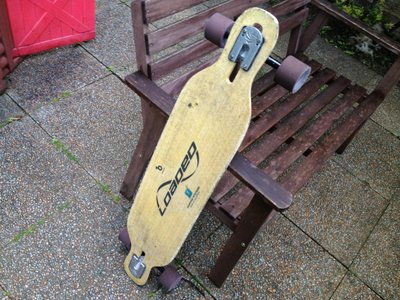 
Order from muirskate.com and get the new muir wheels with the complete. They make the setup about $25 cheaper than if you bought it with others. They have good rolling thane and are quality wheels.

crieschl
Posts: 644 - Karma: 108
Karma: 108
Posts: 644
Ridiculous
I don't know a ton about longboarding, but I've really liked the look of the Double Kick Penguin from Longboard Larry, maybe not for cruising but for sliding and having the added kick tails on there seem like they would be really fun 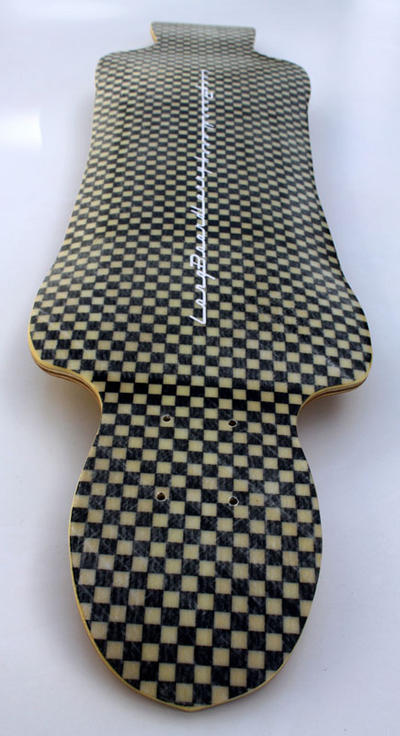