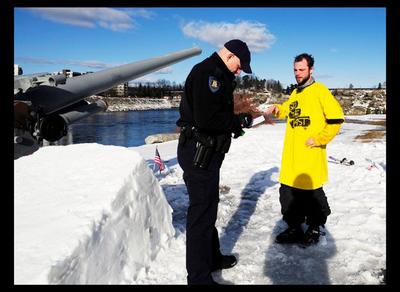 hot.pocket
Posts: 3732
Karma: 75199
Posts: 3732
Addict
It's not that he is going to "take it out" it has to do with paint chipping etc...
I'm not saying its right that he should be reprimanded for hitting something, but its the same as hitting a sturdy rail, obviously you are not going to destroy it, but you might chip away at it a little, and that's where the government / authorities see "destruction".
Jun 7 2012 9:50PM

CassiusClay
Posts: 1759
Karma: 9448
Posts: 1759
Insane
...And you also see it as destruction, because its "more than just a rail", the way you've posted, you agree with the group that believe its a "very significant object". To a lot of people its not. It means nothing. Why shouldn't you be able to ride a war monument? Most are created after the fact and in terms of materials, none participated in the war. Also, it seems much more likely that a family rooted in a monument has an obscure relation with the family member they lost. A war monument is merely a national memorial for the general occurrence of death, not a single, personal death. There is really no reason to believe everyone thinks that its a "religious object" or that a "large group of people" support it - there is a large group that does not at all believe that a simple monument represents their family.
I don't even honestly understand the debate over a graveyard.... they're dead. When I'm dead, ride over me all you want because I will have no clue that you are doing it. Spray paint my gravestone if you want, it won't matter to me.
I understand that you want to look like a goodie goodie cocksucker. Honestly though, monuments are preserved by the government for a nation. Personal deaths are preserved by families and are not material to the rest of the nation. Grinding a monument is more of a 'fuck the government' than it is a 'fuck the soldiers' plea. Stop being a bitch.
Jun 7 2012 11:09PM

hot.pocket
Posts: 3732
Karma: 75199
Posts: 3732
Addict
I was simply asking what people thought about it and their stance on it.
Good for Shea for doing doing what he wants and hitting it, I just personally don't agree with it.
That doesn't make me a bitch or a goodie goodie cocksucker.
Jun 7 2012 11:16PM

.ZT.
Posts: 5679
Karma: 65146
Posts: 5679
No Life
also this thread reminds of me of the Futurama episode where it is "freedom day" Zoidberg eats the flag and then the war vet, Old Man Waterfall defends him because he believes in freedom and will die to protect it. Hahahaha
Jun 7 2012 11:20PM

CassiusClay
Posts: 1759
Karma: 9448
Posts: 1759
Insane
I'm representing my opinion as you did yours. I enjoy the fact that you posted an aggressive statement asking someone to question you, and when they do, you panic. You have nothing to say.
Jun 7 2012 11:36PM 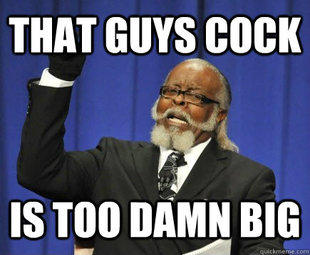 NinetyFour
Posts: 8652
Karma: 321981
Posts: 8652
Crazy Fool
I mean, that canon probably did see service, there are lots of local monuments that have seen service in my area, training and the real deal. Here's an image for though; found it from iSmokeweed's "Powerful Images" thread. 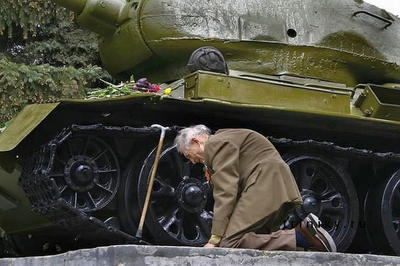 would you jib this Russian tank. Sure it would be cool, but look at this Russian vet. He spent a lot of time in that thing, probably saw some horrific stuff from it's viewports aswell. I think it should be left in peace so it and the Russian vet can have the respect they earned. Hopefully my mobile embed worked.
Jun 8 2012 12:02AM

CassiusClay
Posts: 1759
Karma: 9448
Posts: 1759
Insane
Fair enough, i'll settle down. I just think its ridiculous that there should be 'off limits' urban spots. If you harm a public memorial or a corporate spot its the same cost and the same loss. I don't believe a public memorial should be on any higher standing than other private property, churches included. If a church is not a sanctuary for yourself, do you feel the need to respect it? A lot of people would say yes. A lot of those people would not mind disrespecting other private property though, which may be a sanctuary to those who've built it.
I came across very strongly against hotpockets or whatever his username is. I didn't mean for it to be personal, its just a view I believe in. If you can destroy private property, why would you have any reason to not destroy specific private property?
The photos were cute though...
Jun 8 2012 12:05AM

CassiusClay
Posts: 1759
Karma: 9448
Posts: 1759
Insane
So, based on your photo, it should change if someone actually did combat in it? Why is that any different from someone burning sweat putting together a staircase and handrail for pay? You really can't stop someone from hitting either, and both laborers chose to do what they did, and both may have enjoyed their work. I've never understood the difference between hitting something 'sacred' and something 'not sacred'. I find it difficult to moralize a hit when you can't moralize another. "Stop being a bitch" came from the fact that I see no difference in wrecking property that is potentially equal memorable. Its the hypocrisy of labeling certain features as 'sacred' and others as 'hittable'.
I labelled him as a bitch because he hasn't questioned hitting other private/public features. Just a criticism to those who look down on 'sacred features' - every urban feature is sacred to various peoples.
Jun 8 2012 12:48AM

CrotchKiller
Posts: 9043
Karma: 130894
Posts: 9043
Crazy Fool
you're taking this way to serious. its an internet forum. trying to beat people into submission isn't going to work. 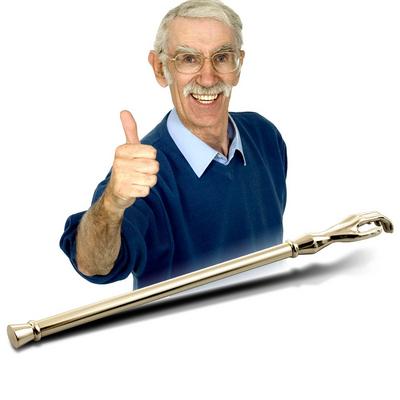 Meases_Pieces
Posts: 1293
Karma: 87007
Posts: 1293
Insane
why are people getting all up in arms (teehee) about this war memorial but they have no issue when people hit public art installations? isnt the whole idea of freeskiing build as a counter culture that is applauded for approaching urban landmarks in a new way. who are all of you to set rules on what people can and cannot do. I dont care what you personally do but dont pass judgement on others.
Jun 21 2012 11:02AM