Christians, by definition, are those that consider the Bible their holy text and Yeshua Christ their messiah, the living incarnation of God and the composing the most intimately significant portion of the Holy Trinity. If you do not follow the morality espoused in the Bible, you are not following the word of God, ergo, you are not in line with what God considers the highest moral law.
You are not a Christian if you do not follow the morals in the Bible. The Bible says Homosexuality brings the death penalty, rape constitutes marriage, and women are eternally submissive to men (lev., 1 tim, 1 judges), to use a few examples. If you do not follow this, you are not a true Christian. You may squirm and wiggle your way out of this argument by attempting to redefine christianity as otherwise, but this christianity is that which is dictated by God's representation on earth, the Pope, and you are out of line with your religion if you do not believe these things.
Now, as for the "EVERY SINGLE PERSON" bit, if you contribute to an institution that claims overarching moral authority in conjunction with claiming the Bible as its source of morality, you are in grievous violation of human decency and yes, you are guilty of supporting an organization that wantonly retards the progression of human rights.
If you support an organization that doesn't, then you are not Christian. Take your pick.
Apr 16 2012 8:48PM 0 0

WestWoods
Posts: 960 - Karma: 414
Karma: 414
Posts: 960
Insane
I see both sides, one being "if you believe in God" which I do, that Adam was made with Eve, or vice versa, seeing as men and women are here on Earth to procreate and have familys, while on the other hand I see people who are so nice yet homosexual, It confuses me.
I just tried to quickly study to find an answer, and roughly what I got from it all is, the reason we are on Earth is to be tested, to prove that we can be like Christ and have perfect spiritual bodies along with glorified immortal bodies, but due to the fall of Adam and Eve, we have been given mortal bodies that must die, thats why christ came to earth because he was without sin and could take on the sins of everyone in the world so that they could return to heaven as perfect spiritual bodies. You see though the point of earth is to have free agency to prove that you care to be in heaven again. Now God loves all his children, always, homosexuals have been given the choice to make their own decisions, Its also been said that you can love many people in this world, but again it just goes to show the request of obedience to the religion, so the church is not hating and against homosexuals as people, but instead trying to further themselves from the 'act' of homosexuality, so as to not condone it.
I do not agree with homosexuality, nor does my church. BUT we love everyone. does that make sense, Im really not good at explaining stuff I don't think...
Apr 16 2012 8:50PM 0 0

Applejack
Posts: 205 - Karma: 9
Karma: 9
Posts: 205
Loner
TBH, I have mormon friends. We just don't talk about religious stuffs and I don't get confrontational because they understand that not everyone needs or wants religion around them. Peaceful, and productive.
Apr 16 2012 9:03PM 0 0

and just for fun 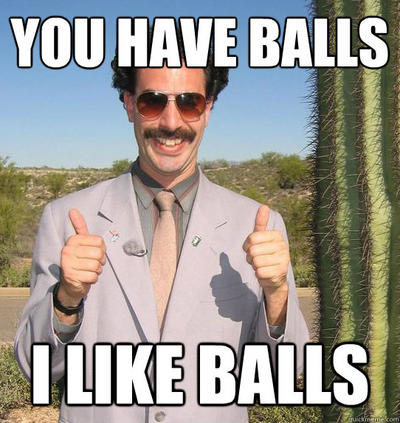 EmperorKuzco
Posts: 6660 - Karma: 250
Karma: 250
Posts: 6660
No Life
Here's where I don't understand that you don't agree with homosexuality. Why not? It's a biological makeup that is beyond the control of anyone. Why not accept them as fellow human beings (not saying that you don't) and don't they deserve just as much rights as you and me. I think church should be absolutely completely 150% separate from having any say in politics whatsoever. What the Mormons are doing in California is just imposing their beliefs on other people, which upsets me soo much. Why can't everyone just live equally without everybody's religious beliefs affecting the lives of others with different beliefs? WHY CRUEL WORLD!!! WHY!!

WestWoods
Posts: 960 - Karma: 414
Karma: 414
Posts: 960
Insane
The only thing that seperates us, is we don't believe its biological at all, but simply the person growing up understanding its okay, and THAT is why the church is against, because they believe its the person and not the DNA. You have my word, the day the church tells me homosexuality is okay, is the day I quit the church, after all this time of telling me otherwise, only time will tell I guess. WHYYYYYYYY?!?!?!
also, look up john mayers song- belief
It's like my favorite song, and it goes freaking perfect with our discussion!!! GO GO GOOOO
Apr 16 2012 9:11PM 0 0

WestWoods
Posts: 960 - Karma: 414
Karma: 414
Posts: 960
Insane
so if believe in anything your a moron, all people who believe in religion are morons thats now a given, so yes all people that believe are morons! and if you believe in nothing, it should mean your the opposite, so in fact intelligent.
Unfortunately for you you 'believe' without knowing (much like religion) that my parents are mormon? so you are. in fact. a moron yourself :)
Apr 16 2012 9:18PM 0 0

its cool that you volunteer though dont get me wrong

EmperorKuzco
Posts: 6660 - Karma: 250
Karma: 250
Posts: 6660
No Life
He has already said he joined on his own. I think it is sorta ignorant to say that it's their choice by growing up thinking its okay. Just ask NINJA_STEEZ. I'm sure he will tell you his story and that parents aren't always ok with their children being gay. A few gay and lesbians came to my school and they were in high school and college I think from the
Apr 16 2012 9:25PM 0 0

EmperorKuzco
Posts: 6660 - Karma: 250
Karma: 250
Posts: 6660
No Life
Dam iPhone.. Drone one of the gay lesbian transgender alliance groups one spoke how religious his family was and when he told his parents he was gay he was mercilously beaten and was pretty much disowned. He was also told gays were going to hell as a kid I think his family were of those crazy insane baptist religions. Yet he was gay and group thinking and being told it wasn't.
Apr 16 2012 9:29PM 0 0

Professor: So, you believe in GOD ?

Professor: Is GOD all powerful ?

Professor: My brother died of cancer even though he prayed to GOD to heal him. Most of us would attempt to help others who are ill. But GOD didn’t. How is this GOD good then? Hmm?

Professor: Where does satan come from ?

Professor: That’s right. Tell me son, is there evil in this world?

Professor: Evil is everywhere, isn’t it ? And GOD did make everything. Correct?

Professor: So who created evil ?

(Student did not answer.)

Professor: Is there sickness? Immorality? Hatred? Ugliness? All these terrible things exist in the world, don’t they?

Professor: So, who created them ?

(Student had no answer.)

Professor: Science says you have 5 Senses you use to identify and observe the world around you. Tell me, son, have you ever seen GOD?

Professor: Tell us if you have ever heard your GOD?

Professor: Yet you still believe in Him?

Professor : According to Empirical, Testable, Demonstrable Protocol, Science says your GOD doesn’t exist. What do you say to that, son?

Student : Nothing. I only have my faith.

Professor: Yes, faith. And that is the problem Science has.

Student : Professor, is there such a thing as heat?

Student : And is there such a thing as cold?

(The lecture theater became very quiet with this turn of events.)

Student : Sir, you can have lots of heat, even more heat, superheat, mega heat, white heat, a little heat or no heat. But we don’t have anything called cold. We can hit 458 degrees below zero which is no heat, but we can’t go any further after that. There is no such thing as cold. Cold is only a word we use to describe the absence of heat. We cannot measure cold. Heat is energy. Cold is not the opposite of heat, sir, just the absence of it.

(There was pin-drop silence in the lecture theater.)

Student : What about darkness, Professor? Is there such a thing as darkness?

Professor: Yes. What is night if there isn’t darkness?

Student : You’re wrong again, sir. Darkness is the absence of something. You can have low light, normal light, bright light, flashing light. But if you have no light constantly, you have nothing and its called darkness, isn’t it? In reality, darkness isn’t. If it is, well you would be able to make darkness darker, wouldn’t you?

Professor: So what is the point you are making, young man ?

Student : Sir, my point is your philosophical premise is flawed.

Professor: Flawed ? Can you explain how?

Student : Sir, you are working on the premise of duality. You argue there is life and then there is death, a good GOD and a bad GOD. You are viewing the concept of GOD as something finite, something we can measure. Sir, Science can’t even explain a thought. It uses electricity and magnetism, but has never seen, much less fully understood either one. To view death as the opposite of life is to be ignorant of the fact that death cannot exist as a substantive thing.

Death is not the opposite of life: just the absence of it. Now tell me, Professor, do you teach your students that they evolved from a monkey?

Professor: If you are referring to the natural evolutionary process, yes, of course, I do.

Student : Have you ever observed evolution with your own eyes, sir?

(The Professor shook his head with a smile, beginning to realize where the argument was going.)

Student : Since no one has ever observed the process of evolution at work and cannot even prove that this process is an on-going endeavor. Are you not teaching your opinion, sir? Are you not a scientist but a preacher?

(The class was in uproar.)

Student : Is there anyone in the class who has ever seen the Professor’s brain?

(The class broke out into laughter. )

Student : Is there anyone here who has ever heard the Professor’s brain, felt it, touched or smelt it? No one appears to have done so. So, according to the established Rules of Empirical, Stable, Demonstrable Protocol, Science says that you have no brain, sir. With all due respect, sir, how do we then trust your lectures, sir?

(The room was silent. The Professor stared at the student, his face unfathomable.)

Professor: I guess you’ll have to take them on faith, son.

Student : That is it sir … Exactly ! The link between man & GOD is FAITH. That is all that keeps things alive and moving.

haha sorry to biff bro, but thats even funnier that thats what she meant. why the hell would I get a ged when I can just be valedictorian at a normal school.

sorry to be such a nuisance to everyone haha