Amadeus.
Posts: 3050 - Karma: 382
Karma: 382
Posts: 3050
Addict
Having religion for the couple of morals it teaches is not needed. Some of the moral laws in leviticus are absurd and include things like if someone has sex on their period they should be stoned to death, and if you are working on sunday you should be killed. Do we really need a book like that to tell us whats right or wrong? not to mention it is absolutely insulting to suggest that we would all be raping and killing each other if it wasn't for the 10 commandments. (not to mention that contradicts with all the way more highly developed societies at the time that weren't associated with ancient palestine.) Morality is innate in us and their is no reason to have religion anymore. just as Alchemy is taken over by chemistry, and astrology is taken over by astronomy, religion is taken over by science
Apr 15 2012 11:54PM 0 0

WestWoods
Posts: 960 - Karma: 414
Karma: 414
Posts: 960
Insane
Look, I don't enter the ghettos of Compton screaming "I'M WHITE AND DESERVE AS MUCH STREET CRED AS THE LATIN KINGS!!!" then why are gays coming to an already established religion saying "change your beliefs for me" one does not simply change their beliefs that they have wished to stay firm in. Also you say "Then if you're a mormon man, don't marry another man." same thing if your into homosexuality, thats fine. Its their choice, just don't enter and try and change a church that's against homosexuality.
Apr 15 2012 11:56PM 0 0

Bill.Nye
Posts: 4060 - Karma: 2,106
Karma: 2,106
Posts: 4060
No Life
NO ONE IS TRYING TO CHANGE YOUR CHURCH
Your church is trying to change our SECULAR government. If mormons don't like gay marriage then they don't have to perform marriage ceremonies for gays, that's fine. I don't run into synagogues and throw bacon at the people there, but if they try and get it banned from the grocery store, we're gonna have a fucking problem. Same goes for Mormonism and gays; if they don't like it, they don't have to do it, but they spent $20 million dollars (a shiiiiiiiiitload of money) on preventing gay people in california from getting married. When you do shit like that, you lose ANY RIGHT to play the "live and let live" card.
If you can't understand this, you are fucking stupid.
Apr 16 2012 12:00AM 0 0 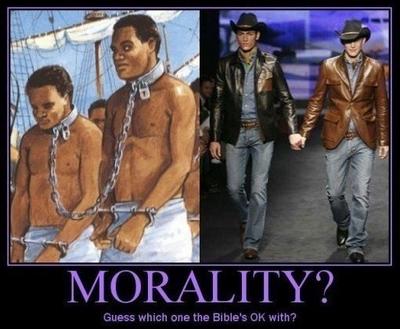 WestWoods
Posts: 960 - Karma: 414
Karma: 414
Posts: 960
Insane
We believe its wrong... why not protest it. It is a free country we live in, if others don't agree 'simply' say no, and we will respect the ruling, while still keeping our belief. We aren't waging war. War is bad haha but we believe it, so we are going to try and live it and spread it as is expected. Shoot Im friends with gay people, I've told them I'm mormon and that I don't agree with it, but they are still great people. We as a church just want to provide an image of pure reproduction and creation of life, with husband and wife. We where born with penises and Vaginas, if thats not a sign that men should be with women, i don't know what is. I also don't understand why your getting so angry and calling us stupid :(
while again, we are only stating what WE believe, you don't have to accept it, just don't show us disrespect we don't deserve.
Apr 16 2012 12:10AM 0 0

WestWoods
Posts: 960 - Karma: 414
Karma: 414
Posts: 960
Insane
Someone please post John Mayers "belief"
the song pretty much states that belief is in charge of all that happens in life, even the lack of believing is like a belief in it's sense, and that other vs. other beliefs will always contradict and cause contention.
It's a good song perfect for this thread lol
Apr 16 2012 12:18AM 0 0

Amadeus.
Posts: 3050 - Karma: 382
Karma: 382
Posts: 3050
Addict
omfg yes! You are right! We live in a free country. A secular republic meaning none of your religious ideas will ever get public preference. you have your religion and the right to keep it to yourself but it is unconstitutional for the government to endorse it so stop trying.

Also being gay is completely natural. There are even gay animals in the world like the gay penguins at the central park zoo lol. The science that has gone into researching homosexuality and things like the "gay gene" has shown that being a gay really isn't a choice. Its pretty obvious too, sometimes from a really early age before any knowledge of sexual orientation reaches a child they show signs of being effeminate or liking boys etc. etc.

Why don't you extend you "can't we just love" message to gays instead of calling them sinners and condemning them to eternal damnation ?
Apr 16 2012 12:21AM 0 0

In the case of homosexuality, the inherited traits that are more common among male homosexuals might include a greater than average tendency to anxiety, shyness, sensitivity, intelligence, and aesthetic abilities. But this is speculation. To date, researchers have not yet sought to identify these factors with scientific rigor. What the majority of respected scientists now believe is that homosexuality is attributable to a combination of psychological, social, and biological factors.


Any person who curseth his mother or father, must be killed. (Leviticus 20:9)

If a man has sex with a woman on her period, they are both to be "cut off from their people" (Leviticus 20:18)

If a priest's daughter is a whore, she is to be burnt at the stake. (Leviticus 21:9)

Anyone who curses or blasphemes God, should be stoned to death by the community. (Leviticus 24:14-16)

^those are gods definition of things that are right? Do you or anyone in civil secular western society think any of that is moral? no because we are educated.
Apr 16 2012 12:26AM 0 0

WestWoods
Posts: 960 - Karma: 414
Karma: 414
Posts: 960
Insane
Okay in the most dramatic sense, if everyone was gay, then the world would end. Eveyone would eventually die off, how can I support something that would end the earths population, killing, disease. all end population. I don't care for any of it. How could I love that kind of act, I love the people, like I said some are my friends.
Apr 16 2012 12:27AM 0 0

Applejack
Posts: 205 - Karma: 9
Karma: 9
Posts: 205
Loner
I went to go eat and I come back to this prepackaged, absurd, barely applicable and wholly ironic display of regurgitated rhetoric?
Here's the thing, J, you said Man's search for mean is the most basic fundament of successful life. Well, we'll go Sam Harris' route in rhetorical line of questioning here:
"I challenge you to think of a question upon which we have had a scientific answer, however inadequate, but for which now the best answer is a religious one."
You tell me it's the most basic building building block? Then you are retarding Man's pursuit for meaning by investing in fairytales and false logic that embitters and disenfranchises your fellow man because you cannot comprehend what it means to work hard to understand the world around you.
Apr 16 2012 12:28AM 0 0

Bill.Nye
Posts: 4060 - Karma: 2,106
Karma: 2,106
Posts: 4060
No Life
Quoting individual lines for clarity again
"We believe its wrong... why not protest it."
That's fine, but you lose the right to say things like "why can't we all just get along" and "stop trying to change my religion." If your religion is going to try to change my government, it's no longer sacrosanct. If you are going to play in the public arena, don't complain about public criticism and disapproval.
"It is a free country we live in"
Then why shouldn't gay people be allowed to marry? You're talking out of both sides of your ass.
"if others don't agree 'simply' say no, and we will respect the ruling, while still keeping our belief. "
Except you don't, because public opinion in California was in favor of gay marriage being kept legal until a $20 million dollar campaign of lies was waged by the mormon church.
"We as a church just want to provide an image of pure reproduction and creation of life"
Then do that **as a church** and don't try to make it the law **of the state.**
"We where born with penises and Vaginas, if thats not a sign that men should be with women, i don't know what is."
We were also born with assholes and mouths, but for some reason your religion doesn't like us playing with those ones.
"I also don't understand why your getting so angry and calling us stupid"
Because you're being stupid.
"while again, we are only stating what WE believe, you don't have to accept it"
EXCEPT YOUR CHURCH AND IT'S MEMBERS ARE SPENDING MILLIONS OF DOLLARS TO MAKE EVERY PERSON IN CALIFORNIA ACCEPT IT WHETHER THEY LIKE IT OR NOT!!
You are trying to have it both ways and you don't seem to realize it, and THAT'S why I'm calling you stupid.
Apr 16 2012 12:28AM 0 0

Bill.Nye
Posts: 4060 - Karma: 2,106
Karma: 2,106
Posts: 4060
No Life
First of all, nothing you said there precludes homosexuality being a choice.
Second of all, NARTH is a group which goes AGAINST the mainstream scientific consensus when it comes to homosexuality. Every major scientific and medical organization in a relevant field disagrees with the idea of "reparative therapy" when it comes to homosexuality and states that homosexuality is not something that needs to be "cured" or "repaired," and that attempts to do so are psychological harmful.
Apr 16 2012 12:36AM 0 0

WestWoods
Posts: 960 - Karma: 414
Karma: 414
Posts: 960
Insane
Im gonna crash, I'll try and be back tomorrow, also if you think religion is stupid then the members are going to coincide in stupidity in your mind, Im not stupid just firm, as you are. haha and honestly I've talked to higher authority and when it comes to your body after marriage sexual relations between husband and wife can be completely up to and between the two. We aren't evil people, accept the fact we are good wholesome people, and quit thinking we are trying to geniside anything that goes against us hahaha Goodnight everyone. everyone love everyone!!!
Apr 16 2012 12:39AM 0 0 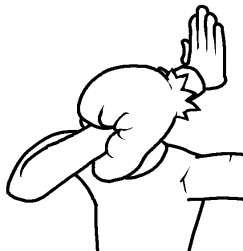