Liam Stacey, 21, appeared at Swansea magistrates' court after tweeting about the Bolton Wanderers player who collapsed during a FA Cup tie against Tottenham Hotspur on Saturday.

The 23-year-old, who suffered a cardiac arrest, remains critically ill.

He was arrested after his comments on the social networking site were reported by other users.

He has been released on bail and is due to be sentenced on 27 March,

Prosecutor Lisa Jones told the court: "Fabrice Muamba collapsed on the pitch and was believed to have died."

Stacey tried to "distance himself" from the tweets by claiming his account had been hacked, the court was told.

Magistrates heard he later tried to delete his page but he was arrested on Sunday at his student house in Swansea. 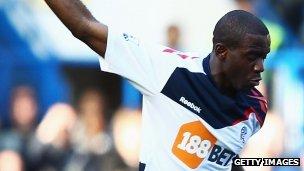 Fabrice Muamba, 23, collapsed during a match on Saturday

When interviewed by police, Stacey said he had been drinking since lunchtime on Saturday and was drunk when he made the comments.

He told police: "I was at the bar when I heard what had happened to Muamba. I don't know why I posted it.

"I'm not racist and some of my friends are from different cultural backgrounds."

Stacey was close to tears as the evidence was given about his tweets.

The court heard he later texted a friend and said: "I said something about Muamba that I shouldn't have and tweeted back to some people who abused me. Getting police on me now which isn't good at all."

Stacey was told in court that he could be jailed over the comments.

He has been bailed until he is sentenced and has been ordered not to use Twitter and other social networking sites.

Here are the tweets in question:

All while the imams preach islamic supremacism in UK mosques unhindered.

but its nice how you compare yourself with a group you apparently hate.

obviously there is a lot of emotion going on in sports especially when it comes to players from other teams. but there is a difference between calling someone an asshole and using a racist expression.

i like that the UK make this guy responsible for his actions even though he was just "speaking his mind". racism has no place and freedom of speech should not protect it.
Mar 20 2012 4:51AM 0 0

Flozz
Posts: 144 - Karma: 13
Karma: 13
Posts: 144
Pro
Where do you draw the line between this case and the 95% of people on the net who use/have used racial remarks before? You ok with criminally charging all those too?

Mike-O
Posts: 14593 - Karma: 1,086
Karma: 1,086
Posts: 14593
Crazy Fool
Crazy how hateful some people can be and how idiotic by proclaiming it to quite widespread channels like Twitter under their own name, no less.

I don't understand how posting racist nonsense on twitter is an issue worth investigating, all while they continuously turn a blind eye to racism that actually results in innocent people being killed. The UK is on the forefront of 21st century appeasement along with France. However, don't you dare say anything bad about their minorities or you'll go to jail! Reverse discrimination at its finest. If some black person in the UK had written the similar things about a white soccer player, do you think this would have gone beyond twitter?

Actual racism needs to be eradicated, like the one that led to the death of three French Jewish schoolchildren by an armed islamic militant on a motorbike.

Mike-O
Posts: 14593 - Karma: 1,086
Karma: 1,086
Posts: 14593
Crazy Fool
It'll be interesting to see how situations like this, from a comparably minor event, and will it just create a more angry divide between racists and tolerants.

But about Toulouse - you have a mind's eye or something, as no one knows the shooter's motive or background, no proof of being an Islamic agenda.
Mar 20 2012 6:16AM 0 0

This guy, if it is the same shooter or group of people in all the cases, has not said a word during any of the attacks, just getting in and getting out.

France has a large amount of organized rightwing extremists, neonazis, racial purists along with anti-semitist groups.

I really wouldn't say just yet that this is the work of an Islamist agenda, look at what happened with Breivik and all the instant condemners of muslim terrorists and open society behind the attack.
Mar 20 2012 7:38AM 0 0

razors-chaz
Posts: 2255 - Karma: 1,250
Karma: 1,250
Posts: 2255
Addict
so you're pissed off that he is being held accountable for his actions on the internet, in the real world, based in a country which has strong views and has laws against public displays of racism?
yeah, yeah he has freedom of speech bla bla bla, but there is having an opinion, and a public verbal assault for no reason other than race.
Mar 20 2012 9:53AM 0 0

Last year, especially, there were a lot of Facebook groups started, such as "Kill or the n*****s!" or "Kill all the gypsies!", and a few others that were not as graphic or strictly enforcing acts of violence towards any given group, but they were inciting hate and as such were dealt with, shut down and given fines.

razors-chaz
Posts: 2255 - Karma: 1,250
Karma: 1,250
Posts: 2255
Addict
Most recently is this http://www.bbc.co.uk/news/uk-england-london-16825874 with John terry the captain of chelsea being trialed for racist remarks to Anton Ferdinand of qpr. So as ive tried to make clear in my posts, public displays of racism are dealt with seriously in the uk especially with or toward people in the media alot, in a bid to try and reduce the amount of racism in a racially diverse country.
Mar 20 2012 10:42AM 0 0

I read an opinion piece pointing out evidence that it could have been an islamic militant. However, should it prove to be a neo-nazi my point still stands since both carry out attacks based on antisemitism.

The UK has a much more significant racial mix than the US. Because of our colonial past, the UK has large number of people from Africa, India, Pakistan, Bangladesh, etc. Therefore, our race hatred laws are a lot stricter, because they're critical to the good functioning of society.

And because we have never been occupied or oppressed, we have no history of ever having our liberty deprived, and therefore the notion of absolute, quasi-libertarian freedom that Americans seem to value is not an issue in the UK. With rights comes responsibility. One mans freedom to express himself ends where the next man's right not to be intimidated or discriminated against begins. Freedom is not, and never should be, absolute.
Mar 20 2012 1:13PM 0 0 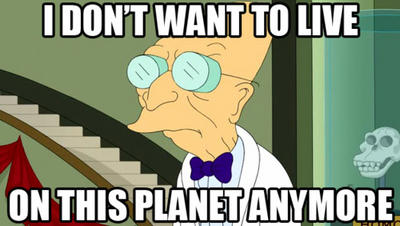