Yesterday, a bunch of the Yota heads and I went out winter wheeling near Buffalo Mine (where we always do our first boot packing of the year for skiing because they always get the first snow) in about 6-12" of snow. It was seriously probably the best wheeling trip I've ever had. Photos to come...

The one time I've been winter wheelin didn't really end up too well.... Went out by myself to snap some architecture photos for a class last year. I was driving down a road on the outskirts of town when I remembered there was an old shack nearby that I could get to by logging road. I didn't want to trudge through the snow on foot and it looked like somebody had driven down the logging road themselves recently, so I decided to give it a shot. Getting to the cabin was fine- it hadn't snow for a while so there was decent traction even with my old, balding all-terrains. I get out and snap my pictures, being somewhat disappointed as the scene wasn't as cool as I had remembered. Nevertheless, it would work for my assignment so I got back into the taco to head back.

Now here's a problem... I didn't want to reverse all the way back out to the paved road, and I wouldn't be able to turn around by leaving the trail since I would sink into the untouched snow like a rock. With that in mind, I drive down farther looking for a place to turn around and find that the trail comes to a T. Great! I decide it would be a good idea to do a three-point turn to get myself turned around. As soon as I turn left onto one of the secondary trails, I hit a sink hole. Reverse, a no-go. Forward, a no-go as well. Even in 4lo locked, all I was doing was burrying myself deeper and deeper. Making matters worse, I realized I was out of cell service and didn't have a shovel, chains, or anything usefull to get me out. After pondering for a bit, I knew I would have to make the best out of this situation. I took my windshield ice scraper out and started the hour long digging session to make a path for all 4 tires back to the main part of the dirt road that I was just on. Even once that was done, it was pure ice underneath and i was going nowhere fast. Finally I clued in, split open a sandbag I had in the back, and layered in over the trail. Eventually I was able to get myself turned around and out of that mess.

Since my pride was already crushed, I didn't take a picture of my truck in it's snow-stuck state, but here's the cabin that I was at

I do plan on going out in the snow this year for real though. This time I'll be sure to have other trucks, shovles, and hopefully a winch available.

Ely was following Kyce too closely...

I like to get drunk, climb trees, and take wheeling pictures...

Wow!!!! Awesome shots and BEASTLY trucks.... I'd love to own something along the lines of any one of those some day. 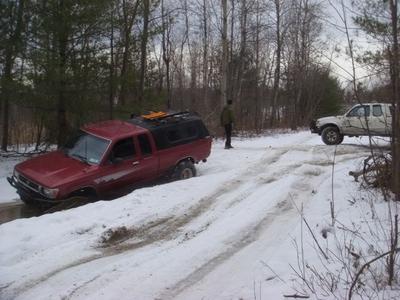 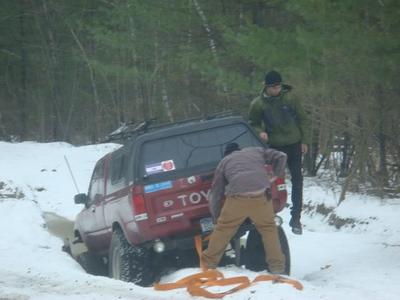 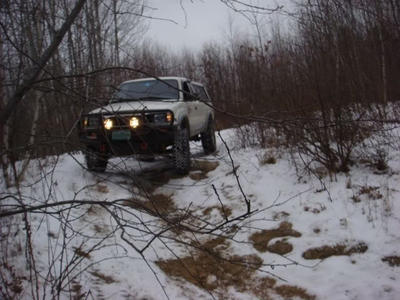 ...and me stuck. Guess the ice isn't as thick as I wanted it to be. 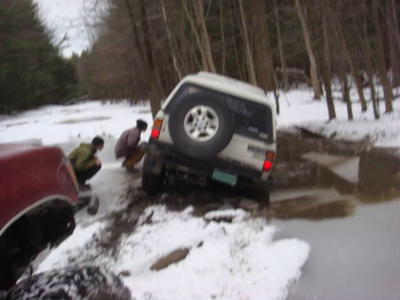 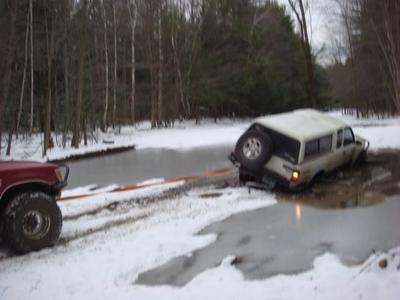 Dave, you SHOULD! Do eeeeet.

DH, those LOOK like stuck holes! You crazy ass. You need a Warn on the front of your rig if you're going to be do much winter wheelin' like that.