But in a stinging floor speech, Senator Gretchen Whitmer expressed her dissatisfaction with the new law, which is said to create a special exception for bullies who have "a sincerely held religious belief or moral conviction," as well as neglecting to protect to bullying against students based on sexual orientation or gender identity,

MatRich
Posts: 4789 - Karma: 1,808
Karma: 1,808
Posts: 4789
No Life
would have been funny if she called the people who passed the bill a bunch of fagots and satanists, she would be just expressing her religion rightfully. it would show them how stupid it is, and theoreticaly she cant get in trouble.

And the blood of all the kids who will inevitably commit suicide will be on their hands. she should have also said that.

vailsux.com
Posts: 1769 - Karma: 439
Karma: 439
Posts: 1769
Insane
I found humor in this statement, because the first part in the Constitution of Canada is pretty much the U.S. bill of rights. The founding fathers wrote that shit back 1787, Canada adopted it in 1982. Does your constitution suck?

corona
Posts: 12279 - Karma: 27,273
Karma: 27,273
Posts: 12279
Crazy Fool
and the US bill of rights, the Canadian Charter of Rights and Freedoms, the British whatever-the-fuck-they-call-it etc etc are basically the same in every civilized country in the world and have been around well before the bill of rights was ever made. You're implying that any country that has a constitution and with rights and freedoms copied it from the US. false.
Nov 4 2011 4:03PM 0 0

day10
Posts: 11549 - Karma: 2,543
Karma: 2,543
Posts: 11549
Crazy Fool
Where does the constitution tell me that I have the right to abuse and torment others because of their sexual orientation or gender identity? I do know that the Constitution says that everyone has the right to life, liberty, and the pursuit of happiness, but how is someone supposed to pursue happiness when they are constantly being bullied LEGALLY by their peers?

Please, explain to me why bullying for religious reasons is different than bullying alone. The Constitution gives you the right to believe what you want to believe, but NOT to use it to ruin other people's lives.

It does not state you can bully someone based on sexual orientation or gender confusion. It states that a school can not adopt an anti-bullying policy that prohibits expressions founded on one's religion. There is a difference.

The U.S. Constitution prohibits the government from restricting expressions based on religion.
Personally I hold freedom of religion a whole lot higher then some crybabies hurt feelings.

If the U.S. Public schools were to give out hurt feeling report forms rather then holding hands bullying would go down. People would learn to 'deal with it.'
The world is not nice, it does not care about what you want or if your daddy never loved you. Learn to deal with it. 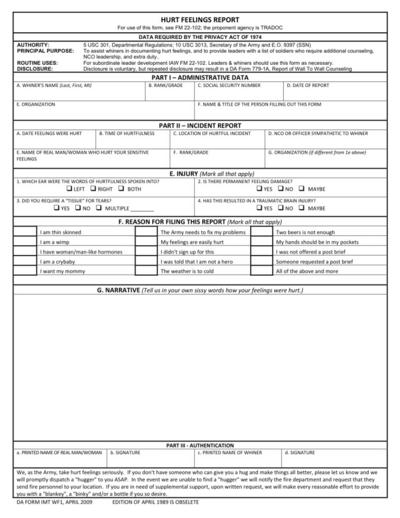 
Whatever, it is all about your interpretation of the bill. You cannot ignore, though, that the bill does intentionally leave room for people to be aggressive because of what their religions state. Hell, Christianity says stuff about slavery. Under what some schools would be able to adopt as their bullying policy, if I were a Christian, I could go around whipping the "negros", because my religion encourages it.

There is room left in this bill for horrible people to do horrible things to good people with no repercussions, and that is wrong.

But my point is that there are things in this bill that are intentionally put there and are totally fucked up.

The way I read it, an exception should not be raised for religion as there should be no law respecting an establishment of religion.  When the exercise of your religion effects others, it crosses the line.

DreddSteve
Posts: 334 - Karma: 84
Karma: 84
Posts: 334
Loner
What part of any religion dictates that you should bully someone because of their beliefs? Isn't that Jesus fellow supposed to love everyone? The students right to practice their religion should be and is protected but I can guarantee you that their religion doesn't condone bullying others. To take this step to say that religions have the need to persecute people because of their beliefs and that's just "a part of being christian/muslim/jewish/whatever" is shameful and disgusting. Unless I'm mistaken, and I may be because I'm not religious, none of those religions has a policy of hate written in their scripture.
Nov 4 2011 8:13PM 0 0 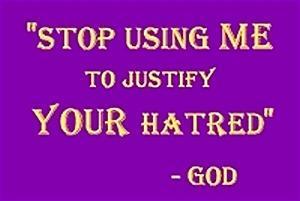 p-fo
Posts: 9366 - Karma: 6,073
Karma: 6,073
Posts: 9366
Crazy Fool
Not to hate, but this is really stupid. I don't know any other way to describe it. The scriptures of most religions don't directly say anything about hating certain groups, but they are interpreted and practiced that way by many, many people. And that's what really matters. I agree with you, religion isn't necessarily a bad thing, it's the people that practice it that suck.
Also, this law respects establishments of religions, which is the clearest way it is unconstitutional. It also allows the "life, liberty and pursuit" of some to be valued over that of others.
Nov 4 2011 8:50PM 0 0

Stickity
Posts: 7750 - Karma: 757
Karma: 757
Posts: 7750
Crazy Fool
actually there isn't freedom of religion in this case because it infringes upon others rights to life, liberty and pursuit of happiness which makes it constitutionally unsound to express your religion in this way
Nov 4 2011 11:19PM 0 0

.Ian.
Posts: 1567 - Karma: 65
Karma: 65
Posts: 1567
Insane
Honestly, I'm christian... but I don't get what the hell these people are thinking? The putting down of another human being no matter what the circumstances is just wrong. This doesn't even make sense. Ok... Whether you believe in god or not for the "christians" who think it's okay to bully anyone, would god honestly want you, as a human to go and put down another human? These peoples mindsets is all fucked up.
Nov 4 2011 11:26PM 0 0

MACAQUE
Posts: 2811 - Karma: 695
Karma: 695
Posts: 2811
Addict
Right to the pursuit of happiness actually means right to own property. So your argument is flawed.
But yea this law is kinda fucked. But as far as I can tell it goes both ways. People are allowed to bully Christians if they have a strong "moral conviction" that believing in a higher power is wrong.
Nov 9 2011 11:31PM 0 0

cobra_commander
Posts: 16779 - Karma: 3,911
Karma: 3,911
Posts: 16779
Post Whore
Do you know much about the terminal ballistics of a .45 Winchester SXT 230 gr. bullet? Well those ballistics, can come in handy when you get jumped or attacked. Thats one of the great things about this country (atleast most States) you can defend yourself from people who attack you, using lethal force if necessary.

If the threat of those terminal ballistics does not solve the problem, the resulting tissue damage sure will!
Nov 10 2011 2:50AM 0 0

Yes, actually it does since the Christian religions denounce homosexuality.  Seeing as it's one of their beliefs, they can berate or put down any homosexual for their beliefs without reprocussion now that this "free expression" is allowed.

Let's cut to the chase.  Why don't you just come out and say you hate gays?  You can hide behind this bullshit rhetoric all day, but you aren't fooling anyone and  the underlying issues you're defending are inexcusable.  You are literally defending the exact letter of the law that allows the Westboro Baptist nutjobs to do what they do.  So seriously man, grow up and stop trolling.  Dont get me wrong, you're a fucking retard but you're still not dumb enough to think we believe your argument is genuine.  God doesn't hate gays, you do.

This makes me want to hang out with you and pretend to be flamingly gay just so I could have the chance to toe up with those cowards.