But in a stinging floor speech, Senator Gretchen Whitmer expressed her dissatisfaction with the new law, which is said to create a special exception for bullies who have "a sincerely held religious belief or moral conviction," as well as neglecting to protect to bullying against students based on sexual orientation or gender identity,

weird when you think about it. i am a complete fan of the US. i play motherfucking football which needs big dedication in europe, i watch the NFL and through that i sometimes watch more american ads than german ones, but stuff like that just turns you to the opposite.

americans really need to ditch their "official" connection to christianity.

no hate again, i bet its not even that noticable in most states but stories like this do nothing to destroy that image.
Nov 4 2011 10:08AM 0 0

Ski_the_east01
Posts: 5203 - Karma: 2,317
Karma: 2,317
Posts: 5203
No Life
I love this country wholeheartedly, but this is completely shameful and embarassing
and like the other kid said it does nothing but portray Americans as ignorant redneck idiots when really stuff like this isn't nearly as popular as foreigners are led to believe..its just a few stories here and there from these dumbasses that make all of us look bad
Nov 4 2011 10:33AM 0 0

I'm as American as the day is long, and I'd just like to go on record as saying this is fucked up, disgusting and any Michinganeer not enraged by this blatant breach of basic human rights should be ashamed of themselves.  Gays are entitled to be gay every bit as much as you are entitled to be straight, get the fuck over yourselves you self-riteous pieces of shit. (People who wanted this bill, not NSers obviously)

To NSers from the rest of the world, DO NOT accept this as a widely held stance in the US.  Unfortunately there are a few crazies that other crazies elected that sneak stupid religious shit in whenever they get a chance and it makes us all look like inbred assholes.  Trust me, this is not even remotely ok and won't last long now that public outrage is building.

First off the bill is NOT Law, it has just been approved by the senate.
I suppose actually reading the bill to find out what it states would be unreasonable? Or making a title that was not misleading?

Michigan previously did not require Schools to have a policy on bullying. The new law requires schools to adopt an anti-bullying policy. It also leaves room for the anti-bullying policies to allow students to express their religious beliefs. Something which is protected by the United States Constitution.

in the interest of fair play there should be a law allowing gays to bully christians.

Do unto others, right?

"there are more important things blablabla"


privately, religion has no problem, but for example, a president still swearing on the bible is just not good in the 21th century.

inb4 someone says "the US are a christian nation". i wonder if you like "islamic nations" too. no wait, you suddenly despise that system and the missing seperation between church and state
Nov 4 2011 11:41AM 0 0 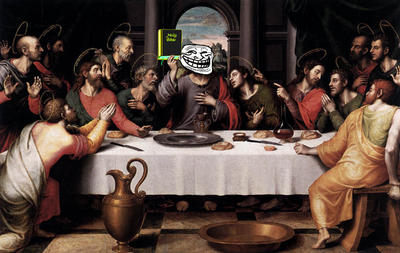 feihlination
Posts: 8356 - Karma: 1,084
Karma: 1,084
Posts: 8356
Crazy Fool
of course. its dumb how people always have that ONE thing that completely drives the country out of control.

depending on threads its one of these

I am just trying to get it back from fiction towards fact. The thread creator, Senator Whitmer and the Huffington Post Gay Voices, have attempted to make this something it is not.

Here is the section that has Senator Whitmer up in arms. It appears she has a problem with public schools and the State of Michigan, abiding by the U.S. Constitution.

"(8) THIS SECTION DOES NOT ABRIDGE THE RIGHTS UNDER THE FIRST

AMENDMENT OF THE CONSTITUTION OF THE UNITED STATES OR UNDER ARTICLE

I OF THE STATE CONSTITUTION OF 1963 OF A SCHOOL EMPLOYEE, SCHOOL

VOLUNTEER, PUPIL, OR A PUPIL'S PARENT OR GUARDIAN. THIS SECTION

DOES NOT PROHIBIT A STATEMENT OF A SINCERELY HELD RELIGIOUS BELIEF

OR MORAL CONVICTION OF A SCHOOL EMPLOYEE, SCHOOL VOLUNTEER, PUPIL,

OR A PUPIL'S PARENT OR GUARDIAN."

A public school, as a part of the state government, is required to abide by both the State and Federal Constitution. This includes allowing students to express their faith.
Nov 4 2011 11:48AM 0 0

K so the title of this thread is misleading, you're right. Your post that states "okay so she's against the constitution" is equally misleading.

Essentially the problem with this law is that it requires that all schools maintain a specific policy which is required to allow bullying so long as it is expressed on religious grounds. Given that license to express religious views is constitutionalized, that was wholly unnecessary, and in effect all it does is provide a blueprint for abuse.

FYI, you also can't pass a law in Michigan that says "It's not okay to burn a cross on a black dude's lawn", so there's that.

The underlying issue is that your constitution sucks.

Christ, not even close. The thing is awful.

Arguably the U.K.'s implied constitution is the best one out there, but I will say this; Canada's constitution is kind of fucked, largely because it's basically two distinct constitutions separated by roughly 100 years mashed together, but it's still a hell of a lot better than the US's.