CaliforniaDouble
Posts: 218 - Karma: 22
Karma: 22
Posts: 218
Loner
We all know the best video footage is shot under perfect lighting conditions, artificial or otherwise, with all the right camera settings. But for many recreational videographers like myself, we have a hard time getting those stars to align, and we have to make up for it with editing. Additionally, film editing is used to evoke a certain feeling or sense of style, and it can turn an already good clip into a great clip.
The purpose of this thread? Share examples of what you have done with your skills in post, and let us provide a resource for other filmmakers (amateur, aspiring, or otherwise) by leveraging newschoolers' talented community of artists.
So let's see it newschoolers... Post your raw clips as you filmed them, straight out of the camera, as well as those same clips after you've done your magic.
Oct 9 2011 2:42PM 0 0

CaliforniaDouble
Posts: 218 - Karma: 22
Karma: 22
Posts: 218
Loner
I guess it's only fair I kick this off with my own example. To preface, I'm in no way anything more than an amateur, but I really enjoy making videos for fun. Recently, a friend approached me and asked if I would shoot her wedding. All she really wanted was a rolling video of the ceremony, but I told her I'd also make a short edit to include on the DVD as well as the continuous video (shot with another camera). Had her expectations been anything higher than zero, I would have passed, but in this case I ended up having a great time with the project.
This clip contains an "after" and "before" shot, although I didn't end up using this in the video. For editing, I copied the clip onto two overlayed video tracks in Premier Pro. The top video was set to 61.5% opacity. The bottom video has a gaussian blur of +31.8 and contrast of +27.2. Both tracks cross dissolve from a white video placeholder, although the top track takes slightly longer to do so. For the unedited clip, I left the standard cross dissolve from white. Both original and altered clips were interpreted at 23.976fps from the original 59.94fps.
I originally came across this technique on a forum found here: http://bit.ly/ouefDi , as posted by Andy Holland.
Check it out below:
Oct 9 2011 2:54PM 0 0 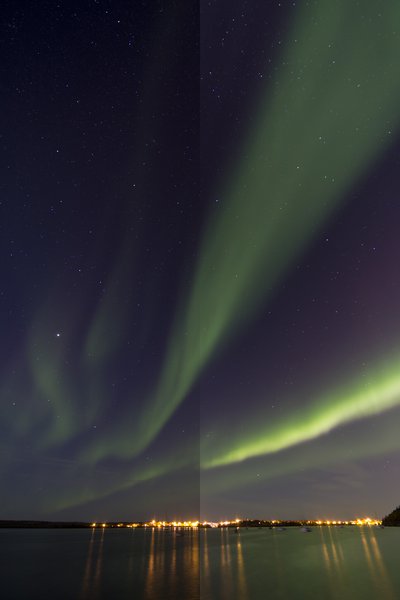 eheath
Posts: 57340 - Karma: 78,639
Karma: 78,639
Posts: 57340
Play Ball
Hey man, not trying to just rain in your parade, but unaltered shot is way better than your "after" clip. The after clip is very soft looking and over exposed. Even the original shot is over exposed, but its sharper and has more contrast. I mean, if that was the look you were going for, then cool, but i thought the first shot was the "before" because i thought the second shot was better. I don't really like the super blown out look soft look, it seems cheesy and amateur to me. Also, that technique seems very time consuming and confusing, why don't you just use color correction filters? I've seen people teach effects by just adding a second track and changing the opacity but i think its a bad technique, but thats just me.
Oct 9 2011 4:47PM 0 0

CaliforniaDouble
Posts: 218 - Karma: 22
Karma: 22
Posts: 218
Loner
Hey, no worries dude. That's exactly the kind of discussion I want to promote here, and I appreciate your criticism. Since I haven't finished the video, except for arranging the clips and cuts where I want them, I'll rethink my approach to "effects" outside of color correction.
Oct 9 2011 6:07PM 0 0


Just took a simple shot, in the first change, i balanced white and black levels in FCP.

juicedrummer11
Posts: 1960 - Karma: 1,325
Karma: 1,325
Posts: 1960
Insane
Just threw this together tonight to play around a little with tilt-shift. First one ever and shot on a gopro. My friend shot the video thats why its so shaky, even after i tried stabilizing. Let me know what you think.