A real life weekend at Bernies!!!!

DENVER (AP) — Two men are accused of driving around Denver with a dead friend, running up a bar tab on his account and using his ATM card at a strip club in what appeared to be a disturbing reflection of the movie "Weekend at Bernie's."

Robert Young, 43, and Mark Rubinson, 25, have been charged with abusing a corpse, identity theft and criminal impersonation.

It's unclear how Jeffrey Jarrett, 43, died, but the men are not charged in his death. The coroner said toxicology tests were pending. Young and Rubinson are free on bond but couldn't be reached for comment Friday.

In the 1989 Hollywood comedy, two ne'er-do-wells find their boss dead at his ritzy beachfront home and escort his body around town, attempting to save the weekend of luxury they had planned.

In Denver last month, according to a police affidavit that gives an account of a story first reported by the Denver Post (http://bit.ly/nEgeF4), Young arrived at Jarrett's home and found him unresponsive.

But rather than call the authorities, police say, Young went to find Rubinson.

The duo returned to Jarrett's home and put his lifeless body into Rubinson's SUV and headed to a nightspot where they spent more than an hour drinking — leaving Jarrett's body in the vehicle, according to police documents. Police say the two men used Jarrett's card to pay for the drinks on Aug. 27, noting "they did not have Jarrett's consent."

Rubinson and Young then drove to another restaurant to hang out, Jarrett's body slumped in the back along for the ride, police say.

They then returned to Jarrett's home, carried him in and put him in bed, according to court papers.

From there, police say, Rubinson and Young went to get gas and made a stop at a burrito joint, again using Jarrett's card. The two men then went to a strip club, where authorities say they used Jarrett's card to take out $400 from an ATM.

As the men left the Shotgun Willie's strip club parking lot, one told the valet and a police officer standing nearby that "they were driving around with a dead guy and they didn't know what to do with it and they were just going to go home really fast," general manager Matthew Dunafon said.

Police went to Jarrett's home and found the body.

Police say Young told them Jarrett was obviously dead while they were at the first stop of the night.

The Denver District Attorney's Office said Young posted a $2,500 bond and is scheduled to appear in Denver County Court for a preliminary hearing on Sept. 27.

Rubinson posted a $3,500 bond and is scheduled to appear in Denver County Court on Oct. 4.

2_fadez
Posts: 7778 - Karma: 4,114
Karma: 4,114
Posts: 7778
Crazy Fool
As the men left the Shotgun Willie's strip club parking lot, one told the valet and a police officer standing nearby that "they were driving around with a dead guy and they didn't know what to do with it and they were just going to go home really fast," general manager Matthew Dunafon said. 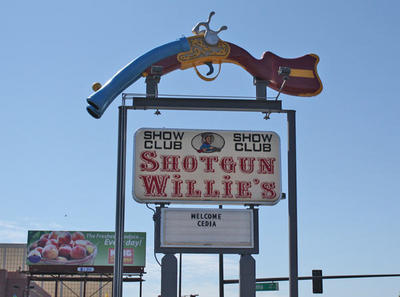