Ghost in my house?

Supergyro
Posts: 797 - Karma: 36
Karma: 36
Posts: 797
Ridiculous
Here's someones ghost story and how they "exorcised" the ghost.
A number of years ago, we found a nice, two-story house for sale that was a screaming deal. Such a low price for the house made my parents suspicious that there was something wrong with it, but the inspection showed that the house was in almost perfect condition. It was in a nice neighborhood too. So, we took the deal and moved in.

It started slowly at first. Every morning, there was a little puddle of water in the upstairs bathroom. Then we started hearing the bathtub drain gurgling in the middle of the night, even though no one had been using the tub. It always stopped gurgling if you went to go check on it and it wouldn't start again.

We also noticed that the dog acted really nervous when he was upstairs. He especially didn't like the bathroom, but we didn't think anything of that since the only time we took him in the bathroom was to give him a bath and he'd never liked baths.

Then things started getting creepy. We'd hear the floorboards in the hall creaking, or the steps on the stairwell, as if someone were walking on them. The puddles on the bathroom floor got larger, and my dad could never find where the water was coming from. We started seeing things out of the corner of our eye, but there'd be no one there if you turned to look.

Then the whispers started. Indistinct talking, as if someone was just out of earshot while talking quietly. We'd randomly wake up at night and hear the whispering, but if we got up to find the source it would stop. The tub gurgled every night now. In the morning, the entire floor would be sopping wet.

This all happened over the course of three or four weeks, so the slow escalation was difficult to notice, except abstractly. By this point, the dog was utterly terrified of spending the night upstairs. He was very nervous about it, but would follow us around upstairs during the day, but at night he absolutely refused to go up there. Eventually, he took to sleeping outside in the shed and refused to go in the house at all after dark. The one time we tried to force him upstairs for the night he literally pissed himself in terror and nearly broke a leg thrashing to get away.

A comment by one of the neighbors that it was good to see the house occupied again got my mom's attention. She asked what she meant, and the neighbor explained that the house had been empty for almost six years. The only time anyone ever went there was when the real estate people sent maintenance guys over to keep it clean so they could sell it. Before that, several families had moved in but always left within a few months.

Now my mom was getting weirded out, and it started to affect the rest of us. The increasing nightly activity was getting very obvious too. We had to leave a towel stretched across the door to the upstairs bathroom to keep the nightly puddle of water from spreading to the hall. The tub gurgled almost constantly, even when you went to go check it to see if there was water in the tub (and the tub was now damp, whereas it had always been dry before). The creaking sound, like someone walking around in the hall or on the stairs, was continuous; it only stopped if you went to see what was making the noise, and it started again as soon as you were back in bed.

It was a teenage girl, soaking wet, naked as a jaybird, and somewhat transparent. Wherever she stood, she dripped water on the floor. She never said anything, never did anything, just stood there, dripped, and stared at you.

The first time she appeared, both my sisters ran screaming from the house and refused to come back inside. They spent the night in the car instead.

She only appeared at night, and only if you were in the room alone. If two or more people were in the room, she wouldn't appear. It took several days before all five of us saw her, and we were pretty creeped out at this point.

So, my dad went down to the city hall and the library to do some research. He pieced together most of the story himself, looking through records of previous owners of the house and newspaper articles.

In the late 80's, the family owning the house (it'd been built in 1976) had a teenage daughter who slipped in the tub, hit her head, and drowned. It never said which bathroom she died in, but it was pretty fricking obvious to us that it was the upstairs one. Her parents were too distraught to stay in the house and moved away. Several other families moved in after that, but none stayed longer than a few months before moving right back out again, and the house would sit empty for months at a time. Finally, as the neighbor had said, it sat empty for almost six years before we moved in. Now we knew why it was such a great deal.

We decided we weren't going to be scared out of our house by some wet, naked ghost, so we took action. We had a Catholic priest come over to exorcise the house. He didn't believe the place was haunted, but he humored us and went through the motions. Nada. She was there, along with all the other phenomena, that same night.

Then we hired some professional exorcist guy. He showed up with a bunch of sage, lemons, and other crap and did his whole spiel. She was still there, but he was nice enough to give us our money back when we said it didn't work.

We tried to get those ghost hunter guys on tv to come check out our house, but the jerks never called us back or anything.

We even got desperate enough to call one of those psychics over, but she went into this moronic seance routine where she did a fake (and terrible) pirate voice and some high-pitched little girl imitation and we threw her out.

So, we decided since we couldn't get rid of the ghost, we'd just out-stubborn it. Nobody was chasing us out of our home.

My parents shared a room, obviously, so they rarely had to deal with the ghost directly. Just the noises and puddle of water in the bathroom. My sisters moved into a room together instead of having seperate rooms, and also spent the night at a friend's place as often as possible since they were really creeped out.

Obviously, this means I had to deal with the ghost nine times out of ten. It got to where I'd leave a big pan on the floor where she stood staring at me so she wouldn't drip all over the carpet. It was really creepy having this transparent person just stand there, staring at you, all night long, but she never did anything or said anything so we figured it was harmless.

One night, my sisters were over at a friend's house and my parents were out late at some office party or something. I was home by myself watching television. There was absolutely nothing on and I was bored out of my mind.

Then I looked over at ghost-girl where she was standing there, staring at me and making the floor wet.

Hmmm. About sixteen, maybe seventeen. Good looking, if you ignored the whole "I'm transparent" bit. And did I mention I was incredibly bored?

She vanished and the house hasn't been haunted since. 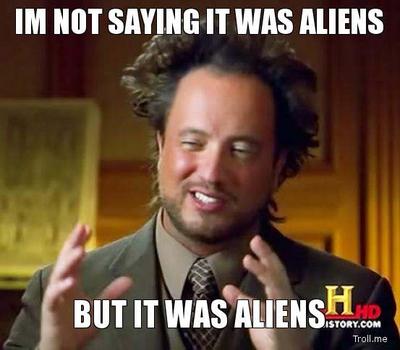