Triple_Strum
Posts: 6382 - Karma: 948
Karma: 948
Posts: 6382
No Life
I just went to that page and it completely sucks. Not to be a jerk, but if you actually want to do anything other than have a few NSers join your page and make it noticeable to outsiders, then you need to have a big fat description of why you want to take down WME. Like "this is a page dedicated to revealing the greedy, aggressive and unnecessary behavior of Warren Miller Entertainment. Recently a suit was filed against Warren Miller, the man, by the company that bears his name, but acts in an opposite spirit. Warren Miller worked with a small filming company, Level 1 LLC..." You finish the rest, but you get the idea. Then, you link several articles, even the thread here on how to boycott WME. Then you send the link to all the skiing people you know.
Oct 8 2010 8:16PM 0 0

Barmski
Posts: 4342 - Karma: 810
Karma: 810
Posts: 4342
No Life
WME will go down. Please support the boycott of WME and all their sub companies including SKIING mag. Fuck WME. Nasty emails will be sent.

snomaster
Posts: 2956 - Karma: 2,894
Karma: 2,894
Posts: 2956
Addict
Yes we can. I just broke my back though I will make every effort to go there. We need Level 1 type of crowds there. And we need to be respectfully discouraging patrons from going inside to watch. 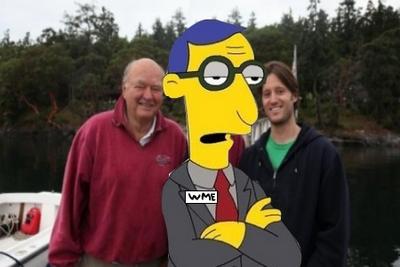 SkierX
Posts: 16253 - Karma: 534
Karma: 534
Posts: 16253
Post Whore
It's not newschoolers that needs to get the message. It's the crusty-older un-educated skier who buys WME movies because they know of nothing else. They need to be shown in a respectful manner why this company should not be supported.

Face it, most of NS wasn't buying WME films even before this lawsuit, so alienating the freeski market is not hurting them. We need to force enough change to get them to withdraw sponsors and lose real tangible sales which consist of non-newschoolers.
Oct 9 2010 12:55AM 0 0

Decrying WME is better targeted to Epic Ski or other gaper-type forums. Better than that even, flood the sponsors and hope that they withdraw, even though it may be too late for that.
Oct 9 2010 1:07AM 0 0

Get.Kronk
Posts: 2543 - Karma: 223
Karma: 223
Posts: 2543
Addict
HE SIGNED A FUCKING CONTRACT GIVING WME RIGHTS TO USE HIS VOICE FOR COMMERCIAL APPLICATIONS AND BROKE HIS CONTRACT. FUCK YOU ARE ALL STUPID. just because you don't like their movies doesnt mean they were wrong from a legal position
Oct 9 2010 3:54AM 0 0

PC.
Posts: 1105 - Karma: 18
Karma: 18
Posts: 1105
Insane
Update your Facebook status's with news of this Facebook fan site. Something along the lines of letting all your friends know where you stand on the issue. I'm sure every person each of you know associate you with snow sports. Thus, a strong stance taken by you will surely give them some consideration.
A Facebook status such as this would do the trick maybe. Feel free to copy if you'd like, though I threw this up pretty quickly.
"TO ALL SNOWSPORTS ENTHUSIASTS:
Warren Miller Entertainment, a massive film company originally started by legend Warren Miller but bought out by a corporation for profit, has recently filed a lawsuit against previous said Mr. Warren Miller. The case you may ask? Mr. Miller did a cameo in Level 1's recent 2009 "Refresh", having a narrator role in the altogether impressive film. WME just won the case against Warren Miller, stating that he cannot essentially appear in ANY films, because they own his image in a sense. I ask that everyone, skier, snowboarder, whoever, to boycott a company who seeks to take away from those that it gains from.

It is times like these that the American legal system disgusts me. But even more so, you shame the entire industry that you depend upon for profit. You shame yourselves. Level 1 is a company with more passion and drive than you could ever hope to attain. A true grass roots company, Level 1 didn't even make $100,000 in total profits last fiscal year, yet you choose to attack them.