I researched skis for MONTHS before I made a final decision, and these were my final decision as I was on a limited budget and wanted the absolute best skis I could afford. I wasn't disappointed.

Me:
Hard charging, I like going straight and fast. I like tight and technical tree lines, carving big SG turns on groomers and super steeps. Moderate technical skill.

PROTIP: If you do buy these, mount them halfway between the center and boot center lines, that's what everyone that I've grilled (including myself, now) recommends.

When I first got these skis, they seemed like your average German-made Volkls; top quality. I bought the 08/09 model as I got them for a sweet deal, but also because the 09/10 skis are made in China, and are of much worse quality than the older, German-made skis. The bases on these are not Head bases (seriously, those things are indestructible), although they're still fairly durable, I've only had one core shot so far skiing on what would certainly merit more than one shot. The top sheet did chip along the edges quite a bit, but that's to be expected with a sidewall ski. The edges are 3/4 laminated on the tip.
Groomers:

On groomers these things carve RAILS, and are crazy fast. The 185s have a 21.6m turning radius (I think mine are 20.1 or 20.4), these things love to go mach-OVER9000 and carve giant turns. They're super stable, I haven't been on a faster ski. On bumps they're nice and fun, poppy and stable.

I didn't get into much powder this year, but on the days that I did these things had pretty good flotation for their 92mm waist. I really like the 130mm shovel on the front, and they appear to be slightly rockered in the tip, sort of like the 09/10 Kung Fujas. Great in ridiculously steep tree lines, as well as slower, more open areas. They're certainly not going to float you as well as a fatter ski, but for a one-ski-quiver I couldn't be happier.

I bought a cheap pair of Rossi Scratches for the park, but I ended up ignoring them almost completely, these things handle the park just fine. Nice and stable on jumps, and decent on rails, they aren't park skis but in a one-ski-quiver they kill it.

The thing I like most about these is the fact that they're so effortless. They transition SO SMOOTHLY to and from every type of snow condition imaginable, something I didn't get from my Scratches. They're so effortless to ski all over.

I bought mine in the 177cm length, I was going to get the 185s, but I got a good deal on the 177 so I decided to pull the trigger. I am 179cm tall, and while I'd probably go with the 185 given the choice, I could barely have been happier with my 177s. The length adds flotation in powder and stability at speed on groomers. They're still easy to swing around in the park. The length is very manageable in the trees, although when it gets steep it can be hard turning if you don't know what you're doing.

The Bridge is a really stiff ski, not the stiffest I've skied, but the flex works well. Personally, I like stiff skis, I find that the flex of this allows me to charge hard on the groomers, and it absorbs transitions from one type of snow to another effortlessly.
Apr 11 2010 3:24PM 0 0

i have mine as an all mtn/touring ski mounted with barons.

i dont ski park with mine... so i cant comment on that.

theyre excellent skis however, they're pretty bomber, i always can feel confident sendin er over cliffs and such that my skis are gonna hold up.
they go about as fast as i want to go.

DGOskeeze
Posts: 140 - Karma: 33
Karma: 33
Posts: 140
Pro
I don't want to burst your bubble, but the bridge didn't come with any rocker in it! They are fully cambered unless you heated and bent the ski yourself. Not til next years full overhaul on the design do they get rocker.
They are a super fun ski though. Love me some new skis.
Good choice!
Apr 11 2010 6:41PM 0 0

i was gonna point that out in my post but forgot.

CCampbell-A1
Posts: 264 - Karma: 13
Karma: 13
Posts: 264
Loner
I don't mean rocker, per se, it's very subtle. I think it makes a difference, though. Have you seen the Kung Fujas? These seem to have a slight amount of early rise, it's noticeable compared to other skis.

The other skis in the pic are 174cm 04/05 Rossi Scratches. The tip rise on the Bridge is rather long. 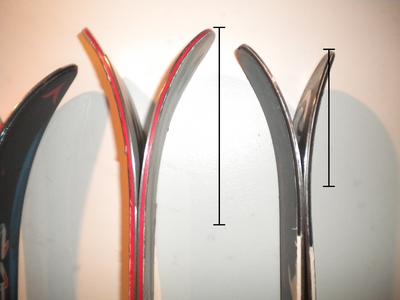