doritos
Posts: 7368 - Karma: 51
Karma: 51
Posts: 7368
Crazy Fool
Hey, my girlfriend and I are trying to start a clothing and print company and we're looking for some feedback. We want a variety of different images... trippy, violent, soulful, etc., so we've put up some early sketches and we want to know what people think. This is a link to some early sketches we've done [FLICKR SLIDESHOW], any feedback would be appreciated!

jamers
Posts: 1311 - Karma: 162
Karma: 162
Posts: 1311
Insane
dude those are fucking sick, i would love a dinosaur killing the shark tee
and that octopus ones fucking ill
id pick some of those up forshure

doritos
Posts: 7368 - Karma: 51
Karma: 51
Posts: 7368
Crazy Fool
Haha no problem. I've been getting really into jazz, rock, blues and funk recently, but I've kept some hip hop in my playlists. If I had to pick any five bands to listen to right now they'd be Soulive, John Scofield, Every Time I Die, Stevie Ray Vaughan, and KMD.

doritos
Posts: 7368 - Karma: 51
Karma: 51
Posts: 7368
Crazy Fool
nice. we're just waiting on some quotes and we'll be up and running. definitely check out KMD, they put out some of my favorite old school rap. real catchy beats and all of them (but especially Zev Love X a.k.a MF Doom) have awesome flow.

VCharette
Posts: 4276 - Karma: 1,036
Karma: 1,036
Posts: 4276
No Life
I was like half amazed half creeped out by those sketches. Some of them are so dope but like that naked woman with a bird head was just way creepy. I would probably buy a couple of those if you clean them up and like make the picture on computer and not actually keep it hand drawn, I guess thats what youre gonna do anyways, right?
Jan 25 2010 10:47AM 0 0

doritos
Posts: 7368 - Karma: 51
Karma: 51
Posts: 7368
Crazy Fool
Yeah, the crazier ones will probably be kept largely to prints. They'd make cool posters, but we don't think the market for shirts depicting rotting zombies mauling cats is too big. Actually, most of our ideas for shirts are not included yet because we just teamed up with another artist whose style fits that medium much better. He has a badass rastafarian lion and a soulful motherfucking black singer with the word "SOUL" written in a dope graffiti font next to him which we think would be perfect. I'll get those images up soon.

doritos
Posts: 7368 - Karma: 51
Karma: 51
Posts: 7368
Crazy Fool
What would they be appropriate for then? Again, I'm thinking posters, but you seem like you have something in mind so I'm curious.

This image isn't for our project but it will give you a pretty good idea of how fucking pimp this shit will look once we color them in. 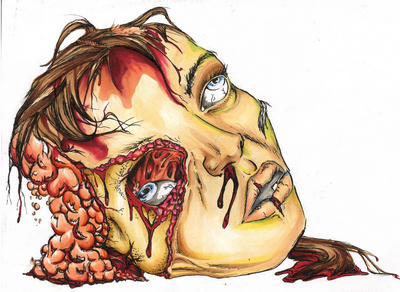 And this is the dinosaur vs. shark battle fully inked and ready to be colored in... 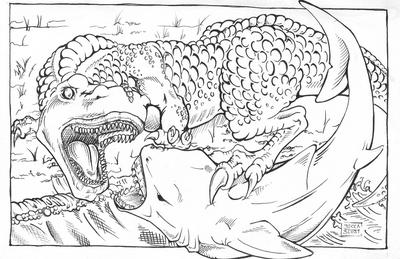 doritos
Posts: 7368 - Karma: 51
Karma: 51
Posts: 7368
Crazy Fool
Awesome, thanks man. Just got a new print from my friend who we're working with that I'm really excited for... He'll be the one tackling t-shirt images, but in the meantime here's the piece he's working on, which could be adapted for a shirt I think. 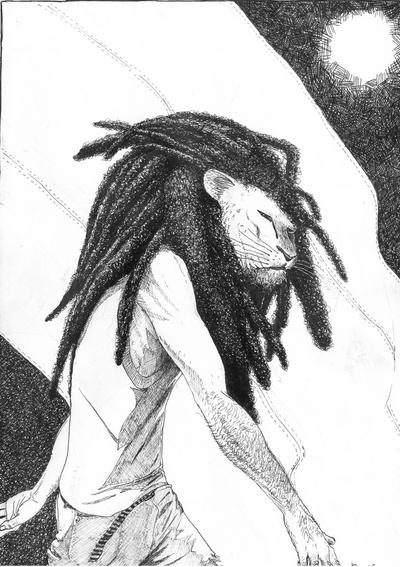 I've also started a skiing print. I attempted to draw a nameless thug doing a tail tap off of a fencepost before going lip on to an urban down rail a la Will Wesson... not sure how it came out, but its pretty early on and I have a lot of work to do on it still. 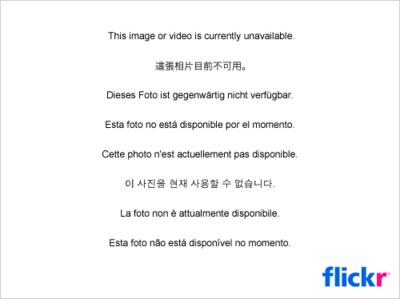