It's too bad you guys weren't around when they printed the bible.

and voila, no religious conflict anywhere. 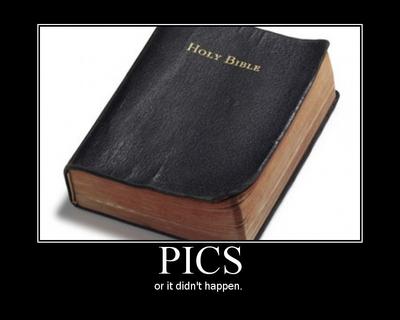 Arabian.
Posts: 9632 - Karma: 54
Karma: 54
Posts: 9632
Crazy Fool
I have accepted Jesus Christ into my life. And you should too. He rode a whale you know. How come you won't believe me? Once when stranded, he went out into the ocean and waited for 3 days, and when all manner of sea creatures came to him, he lassoed himself a couple of sea turtles and rode to safety.
Oct 20 2009 5:06PM 0 0 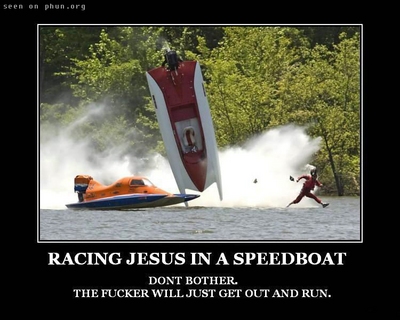 I feel sorry for atheists who go through life with no sense of meaning or purpose.  What guides you?  Honestly, I'd like to know because time and again it seems there are no principles that they follow.  Then you have to ask yourself is that a good way to go through life?  Just wandering?

switchieski
Posts: 575 - Karma: 15
Karma: 15
Posts: 575
Ridiculous
welll, the way i see it is that you can still think a garden is beautiful without thinking there are fairies living under it. i really have a hard time convincing myself god created us, but thats just me, and even if there is a "judgement' i think all there is to it is to be good to one another, and to do everything to buffer, and to bring into equilibrium. If you need god to do that, thats fine with me. the problem comes in when religion starts being THE PURPOSE of people killing eachother. As long as religion has a purely positive impact on your life, im set. when it comes to purpose in life, i savor enjoyment and pleasure every day. i find my enjoyment, in people, places, things and enjoyment, and with this i believe i can live a fulfilling life.BOOM!
Oct 20 2009 5:19PM 0 0

Would you take medical advise from someone who lived 1700 years ago? How about dietary or political advise?

Not saying there isn't a god just saying that you are a fool for believing anything that the bible has to say as historic fact. It is a good story, nothing more.

Here is proof that Jesus is bull shit and no one knows if there is a god or what he is up to.

i dont give two shits if you love jesus. great. if hes helped you live life than great. but how fuckin DARE you suggest that i have no principles. i have principles, i try be a decent person. but dont pretend that just because i dont believe some dude is watching every move i make means that i dont have principle.
Oct 20 2009 5:26PM 0 0

Basically, I am for probably one of the few times I will ever do it quoting Ben here for truth.

KarmaInitiative
Posts: 2028 - Karma: 174
Karma: 174
Posts: 2028
Addict
you have no proof that the flying spagetti monster doesnt exist, therefore it does.

and btw how does jesus existin mean god exists. jesus was a human, i dont doubt that but that has nothing to do with whether god exists

it is rediculous to assume that i have no principles because i dont believe in fairy tales. my principles are to be kind to other people and help them out. god has nothing to do with that

pmw
Posts: 5757 - Karma: 844
Karma: 844
Posts: 5757
No Life
im not really going to try and get involved with this thread. although that was a retarted statement to make on his part, i think he meant no principles in a religious way, which doesnt make his statement any more correct, it was still poorly stated, ignorant, and close minded. i think atheists are close minded, but only the ones that believe their way is the only way (as i realize many other religions have this same belief) and immediately criticize anyone who believes in any higher being, usually in an extremely rude way.
i am ope to people being of any religion, but just like this kid saying it you dont have principles because your an atheist is unexceptable, i think its unexceptable for anyone to tell someone how to live, how their religion is wrong, and for them to feel that they have any right to try and persuade or put down someone for what they believe, or dont believe in. and im not saying at all you are like this, just my thoughts in general.
live and let live.
Oct 20 2009 5:40PM 0 0

So because i dont believe in god i have no meaning or purpose?

Look at the greek gods, they explained the things humans couldnt explain at the time. once we could explain these things using scientific method and reasoning no one believed in the greek gods. So maybe a priciple that we follow is our common sence, and our ability to use logic. How about you ask yourself if believing in something that no one can provide evidence for, and the biggest point to prove gods existance is the point that no one cant prove that he doesnt. It sounds like your in 3rd grade. Get your head out of your ass and stop generalizing.

what happens if you play telephone game ?    the end is never the same word or sentence then at the start, right?  Right.   the bible just played telephone for a couple hundred years.

it's naive to think that a god for such a small planet created the whole thing...  that picture makes you think.

pmw
Posts: 5757 - Karma: 844
Karma: 844
Posts: 5757
No Life
maybe this thread wont be a shit show, as long as people can still keep their heads and be civil just like you.
i dont know why im saying this, but i feel like saying my "religion" if you will
im being raised a christian (im 15). for a while, i went with the flow but now i have more defined feelings on what i believe in. i try to believe in some sort of higher being, dont really know what kind just some sort. and it really helps me to be a better person. i dont think i will be shot down if i "sin", but i do re-think decisions before i make them. if nothing else, believing this gives me a sense of compassion, and it has made me a better person in many ways. something else that has helped me many times, is i always tell myself everything happens for a reason, and although it doesn't always work, it can really lessen the blow of semi-traumatic situations.
Oct 20 2009 5:47PM 0 0

KarmaInitiative
Posts: 2028 - Karma: 174
Karma: 174
Posts: 2028
Addict
i disaggree, i think atheists can be the most openminded. I was raised jewish and am now atheist, so its not like i have been a stubborn atheist my whole life.

To me, atheism is believing what makes sense. A spacegod who was made the whole world but got pooped from it, punished humanity for one person and than destroyed the world out of spite, that doesnt make sense. Living organisms being naturally selected, evolving and speculating, that makes sense

The bible is misinterpreted.

Ben.
Posts: 21463 - Karma: 682
Karma: 682
Posts: 21463
@th1337
and if thats works for you thats great. i have no problem with that. the unfortunate side of it is that for every one of you, theres a religious zealot that is demanding that gays not get married, or that im going to hell or have no morals because i dont believe in god. or god forbid is committing murder based on their religious values.

that being said, i also dont particularly like athiests who belittle those who believe in god. its one thing to have friendly debate, its another to put down those who have different beliefs. now should the other person go after you first, by all means, be just as much of a douche back. but dont run around screaming "if you believe in jesus youre a moron"

SteevJee
Posts: 1916 - Karma: 144
Karma: 144
Posts: 1916
Insane
Atheists can't go around saying anyone who believes in religion is a complete idiot, and someone who believes in a god can't go around calling atheists complete idiots. This debate will never end, and it's the biggest waste of time because no matter how open-minded people say they are, they will never change their mind on the matter.
It's funny because both atheists and people who believe in a God claim they believe in treating people with respect. However, they treat each other like complete shit. The easiest way to live your life is to just stay away from this debate because it goes nowhere and ruins relationships.
Any person of a faith who tells an atheist they are condemned to eternal damnation for not believing in a God is a complete moron, and should never even open their mouth on the matter because its apparent that they are not intellectual enough to even discuss the subject. In the end its all about what kind of a life you lived, and if you are a good person.
Oct 20 2009 6:19PM 0 0

see, atheists can use faith too :D

but seriously, religion is on the decline 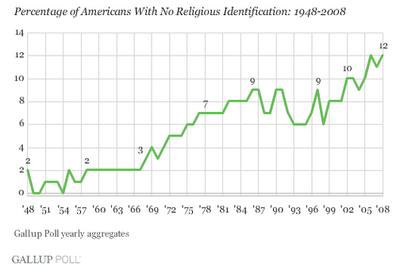 i should make a new bible