I love this corrupt bastard

P.S. read the bold text for the lulz. 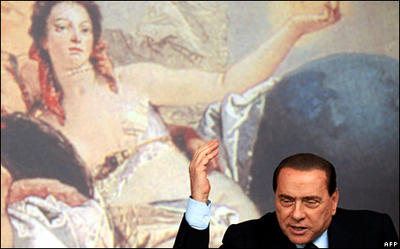 Italian Prime Minister Silvio Berlusconi has described himself as the most persecuted person "in the entire history of the world".

Mr Berlusconi also said he was "the best prime minister we can find today".

In an impassioned statement, he then mistakenly told reporters he had spent millions of euros on "judges", before correcting himself to say "lawyers".

Mr Berlusconi was speaking two days after Italy's top court lifted a law granting him immunity while in office.

Correspondents say the Constitutional Court's ruling means the 73-year-old billionaire will probably have to face a number of trials for corruption and bribery within months.

He has described the cases against him as "false, a farce", saying he will defend himself in court and make his accusers look ridiculous.

The BBC's Duncan Kennedy in Rome says it has been a dramatic week for Mr Berlusconi, and he ended it with a typically defiant flourish.

He was asked by reporters about calls by opponents that he step down because his personal and legal problems were damaging Italy.

I don't see any problem for the country, for the government or for me besides the fact that I will have to take some time out of my work [to attend trials]

"The reality is completely the opposite," he replied. "In my opinion, and not only mine, I am the best prime minister we can find today.

"I don't see any problem for the country, for the government or for me besides the fact that I will have to take some time out of my work [to attend trials]."

Mr Berlusconi said he was a "dam against the Left in Italy", accused the Constitutional Court of being biased, and said any judges who ruled against him were "trying to subvert the will of the electorate".

"I am without doubt the person who's been the most persecuted in the entire history of the world and the history of man," he declared.

It was then that he made one of his trademark gaffes, our correspondent says, by explaining that the money had gone on paying "consultants and judges", before correcting himself to say "consultants and lawyers".

Mr Berlusconi could soon be called as a witness in the appeal hearing in Milan of British tax adviser David Mills.

Mills was sentenced to four-and-a-half years in jail in February on charges of accepting $600,000 (£377,000) from Mr Berlusconi in return for giving false testimony in two corruption trials in the 1990s.

Mr Berlusconi was initially a co-defendant in the case but charges against him were suspended after parliament approved the immunity law. However, the removal of that law has potentially paved the way for the prime minister's trial to resume."