Who is the most talented character in n64 smash

Andrew_Ju
Posts: 9371 - Karma: 55
Karma: 55
Posts: 9371
Crazy Fool
^ false. i will deeeestroy anyone here on supersmash bros for n64. pikachu and fox are the "cheapest" and easiest to win with, but if you know how to play him right yoshi is the best character in the game. the reason for this is that he doesnt have a recovery move, (the up-B move that makes you go higher) so when he is in the air and takes a hit he goes right through the hit instead of getting pushed back, that is only till a certain % of damage though
Aug 30 2009 11:22PM 0 0

Mooose...
Posts: 1807 - Karma: 77
Karma: 77
Posts: 1807
Insane
Almost all noob players use kirby... however kirby can be one the the best characters if used right. The best character in the game is pikachu, but not many players can use him to his potential.

DYFI
Posts: 3836 - Karma: 30
Karma: 30
Posts: 3836
Addict
I will preface this by saying that i am 100% a pure blood falcon fan, but when it comes to the best/most talented character in the game, hands down anyone who is good with him will win no matter what: 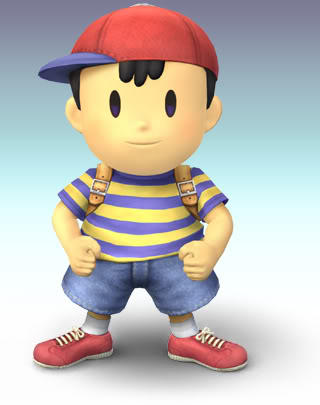 Pike-fire, annoying yet works.  The yoyo, Up + A, down + A, unstoppable. The bat, one of the best over + A moves in the game besides Donkey Kong's bitch slap.  The thunder ability, only controllable attack that can move across the screen, ness can get hit with that and not be hurt at all, AND the best way of recovering from falling of the map,  AND if you're good you can hit other players with that move and it's better than a falcon punch, powered up Samus, or wound up DK.  Add on the fact he can regenerate health from other puny attacks, his jump is better than others, and his grab seems to be the most successful in throwing in both directions, you've got yourself one badass motherfucker.

noscottno711
Posts: 69 - Karma: 11
Karma: 11
Posts: 69
Wannabe
i think we can all agree that mario and luigi are pretty useless, although the latter is my character of choice in brawl.  as far as the m64 version goes, the best characters are indisputably kirby, pika, ness, and fox.  however, under the right circumstances dk is a force to be reckoned with.  basically they are all good if you know their strengths.  except for mario and luigi.

ness the most powerful, but he's very hard to control

and kirby because whenver you were getting thrown out of the map, you could fly back

Mitcheepoo
Posts: 61 - Karma: 28
Karma: 28
Posts: 61
Wannabe
I'm really surprised more people aren't saying DK. DK is my first choice because he's just hard to kill. His grab/throws are super fast, strong, and accurate. He's super tall, so reaching people above him is no problem (especially with the up+A clap). And then the wind-up punch is the end-all to any character. Power is everything.
Aug 31 2009 12:14PM 0 0

Armanzoid
Posts: 2453 - Karma: 26
Karma: 26
Posts: 2453
Addict
Kirby eats babies and human hearts. He can fly for fucks sake, you can never kill him. Then he has the stone thing he does, and that sword, it launches people way out of the ring. When you think you knocked him out of the ring, he comes right back huffing and puffing.

Pow.yuHdig*
Posts: 1902 - Karma: 145
Karma: 145
Posts: 1902
Insane
kirby is the most novice player anybody can be god with kirby its who most people start with and then move onto the other characters who have more complicated moves but ultimatley destroy kirby except in 4 player free for all when every kirby just bricks and laser swords other ppls battles fuck kirby hes for noobs
Aug 31 2009 12:42PM 0 0