Rant about my brothers lost cat

My brother lost his cat, I tried to help and his girlfriend got possessive and mad at me. I guess she thinks I'm overstepping my boundaries for trying to find their cat? What a weirdo.

Ugh.  So my brother has a Bengal cat, and we went on vacation between 06/24- 06/29, and when he got back the housesitter had done a shitty job and lost the cat.  He is usually an outside cat, but he disappeared.

Anyway- I happen to really care about cats, and about my 7 year old neice who the cat belong(ed) to, and so I decided to search online/post on craigslist/etc.  I posted an ad on craigslist offering a reward and using the photos I had taken of the cat previously.  Then a couple of days later, my boyfriend and I dropped by my brothers neighborhood to help call/look for the cat.  We used a container with cat food to help call the cat.  Then we stopped by my brothers house to say hi, and he wasnt home, so we left the food on the front step in case the cat came back.

Today I received a response to my lost cat ad from a woman who said she thought she might have the cat, she lives in Beaverton, OR.  Now-- I know it isn't likely that the cat would be in Oregon- however, the cat likes to jump in peoples cars, or someone could have taken him (cause he is beautiful and expensive)...etc.  I mean, I certainly wouldnt have searched Oregon for him, but in this case, the woman contacted ME, so there's really no reason to not respond.

I sent the contact information from the woman on to my brother and his girlfriend- semi excited- because I had posted pics of the cat, and the woman thought it was him- so that's a good sign.

My brothers girlfriend responds with "Beaverton is in oregon", I say "i know, but its worth checking out"...I mean, the cat is microchipped, so its possible to find out without having to drive down there.  I respond with "if you dont want to contact her, let me know and I will, if you do contact her, let me know what she says"...well, then I get a phone call from my brother thats like "Kelly thinks you're going WAY overboard with this whole cat thing, she thinks you're telling her what to do...I mean, she thinks you're nuts for leaving food on the front step"....what the hell?!  Leave it to Kelly to make this about her, and not about the cat or my niece.  I'm just so sick of people causing drama-- I can't believe I get bitched out for trying to help someone find their cat!!!

On a side note- I contacted the woman- she sent me photos and it looks like my brothers cat.  I sent her a more detailed description and more photos and she said it looks like him and shes going to get him scanned tomorrow.  Granted it could be a look alike- but hey, at least there's a shot in the dark.  She also said he had missing patches of fur, and worn down paw pads, so it's possible he has had a long journey.

So the end of the story is, we will find out if it is the cat tomorrow, and my brothers girlfriend is a bitch for managing to cause drama over EVERYTHING, including things I didn't even think were possible.

Commonwealth
Posts: 3729 - Karma: 11
Karma: 11
Posts: 3729
Addict
There are some people in this world who need to be noticed - whether it is through sports, fashion, etc. Sounds like your brother's girlfriend is feeling overshadowed by your efforts at finding the cat, and she is getting defensive.

Let her be. Just be the bigger person, and if the cat is returned don't gloat or take credit, just quietly remove yourself from the situation.
Jul 10 2009 10:03PM 0 0

i live pretty close to beaverton if you need me to go pick his ass up.

0ptions
Posts: 2198 - Karma: 56
Karma: 56
Posts: 2198
Addict
Honestly I'd tell Kelly to go fuck herself. She has no right to tell you you're being weird about trying to find a cat that she has no ties to. If you really want it back, which I don't see why you wouldn't, you should do everything you can to find it. Regardless of what kelly thinks, especially if its for your niece (I thoughts that what I read, maybe not though...)
Jul 10 2009 10:55PM 0 0

yeah, it is for my niece.  i would feel bad if I didn't do everything I could to try and find it.  I mean, what was I supposed to do, ignore the woman in OR who thinks she has my cat? Why would I do that?  Here's a photo-- the cats look a lot alike: 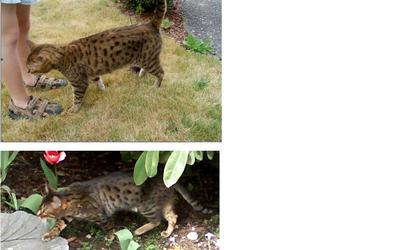 weenox
Posts: 1568 - Karma: 19
Karma: 19
Posts: 1568
Insane
fuck her, she's the unreasonable one.  honestly, you should just ignore her (regarding the whole cat thing) to the point of pissing her off.  what, she's gonna get mad at you for finding your brother's cat?  if i were you, i'd take it to the next level.  get on her nerves, just to show her how unreasonable she's being.

does she suck outside of this situation?

As I read your post, I read it outloud as well to my boyfriend sitting next to me.  I said "does she suck otherwise?" he says "absolutely.  In every way possible."...so that about sums it up.  It's true though, she's completely unsocial, never talks to anyone, is always in a bad mood, and all she does is complain/whine.