I would like to know why skiers and snowboarders clash so much?
I myself snowboard but i have a great deal of respect for skiers that go big.

I think skiiers and snowboarders are a lot alike. We all love snow and will do pretty much anything to shred that perfect pow or session that gnarly hand rail.

If you must get out the flamesauce I dont care.

Most skiers that i meet are just haters i guess.

fragglemuffin
Posts: 3312 - Karma: 438
Karma: 438
Posts: 3312
Addict
i dont hate on snowboarders as a whole...just the ones who think they are tough shit because snowboarding is "cooler"...my best friend is a boarder and he is the only person i usually ski with...he kills it in the park, and i have mad respect to any boarder who kills it

Daydreaming
Posts: 1686 - Karma: 48
Karma: 48
Posts: 1686
Insane
Ive met haters on both sides. ive had board gapers throw snowballs at me from the lift but ive seen some ass hole skier verbally abuse some poor boarder who bugged him for whatever reason.  and everytime i see something like that its always the young kids (like 10 or 11) or noobs that do it, they propagate the issue when really its no biggy

i hate immature kids yelling from the lift at anyone

especially me when i wear tight pants :(
idc i think it looks good so whatever.

omg i couldnt have said anything better.

just like the skiers that are in love with t hall?

i'm the only skier in a group of 8 boarders.

they get theirs back for the payouts and making me dance in ski boots in the car park when i totally destroy them in the park.

skiing has come a long way in a short time thanks to the kick in the arse that snowboarding gave us.

Aznavalanche
Posts: 481 - Karma: 12
Karma: 12
Posts: 481
Ridiculous
i don't mind snowboarders. i have a group that i always go up with, but the only one that will go into the park is a snowboarder.

Im pretty sure anyone that knows snowboarding or skiing knows that shaun white is a total douche and only wins comps because he's shaun white. Yes he's good but not the best.

In the dew tour shaun white won with a 1080, while Torstein Horgmo got second with a switch 1260.

just throw a trick in front of em and they shut up.

noparking
Posts: 1123 - Karma: 49
Karma: 49
Posts: 1123
Insane
I've never really understood the hate against each other everyone talks about. I used to snowboard(15 season) and I never had a problem with any skiers, and now that I am a skier I have never had a problem with any snowboarders. I just think they are a bunch of uppity pricks who give skiers and snowboarders a bad name for being dicks for now reason.

K2skipunk
Posts: 2837 - Karma: 111
Karma: 111
Posts: 2837
Addict
I know my parents dislike snowboarders, but that's because of how they cut the runs. Moguls aren't bumps anymore, and they're long and narrow, and have no flow. Also a lot of boarders ride stupid and cut the parents off. Those are some reasons why they dislike them, and they're oldschool and skied on the hill long before boarding started up. I have no problem with boarders unless they are dicks first.

DingoSean
Posts: 23006 - Karma: 16,536
Karma: 16,536
Posts: 23006
@th1337
the only think that skiings ever had thats been close to a shaun white was maybe J-MO... or maybe simon dumont more recently..
but even then.. shit.. shaun white also has the skateboard crowd's mouths all up and around his genital region as well..
so yeah.. pretty much nobody in skiing can be compared directly.. we have no shaun white or tony hawk yet. thank ZEUS...
as for a 10 > a sw12? sounds pretty lame to the membrane..
but both tricks are nothing compared to the switch double corked 12 like PK threw at X which should have won if it wasnt for simon's 'wow' factor on the 'fans' with a double superman front so there you have it..
Jun 18 2009 4:34AM 0 0

m0nr
Posts: 62 - Karma: 11
Karma: 11
Posts: 62
Wannabe
a few of my mates have just started snowboarding, and when i ask them why they chose it over skiing they say things like

"i dunno, snowboarding just looks so much cooler"

monstersteeze11
Posts: 1127 - Karma: 30
Karma: 30
Posts: 1127
Insane
ya, the younger kids are the ones doing most of the hating. my best friend that i hit the mountain with is a snowboarder. I get pissed off at noobs if they are boarder or skiers. so ya... I don't think ppl should just hate skiers or snowboarder just because they heard somewheres that thats what it is.
Jun 18 2009 10:30AM 0 0

Dhane
Posts: 3866 - Karma: 1,723
Karma: 1,723
Posts: 3866
Addict
nah man, its cool. im not upset that he won at all. what he did for riley with his winnings and all that and like you said, it was a smart move, and you use your brain to win comps. i was just trying to draw a comparison i guess.
back to the thread, i have never experienced any clashes between skiers and boarders, except for those kids who have gone for 3 days and think skiers or snowboarders are the enemy. a ton of my friends are amazing snowboarders, and there a great place to draw inspiration from. no hate
Jun 18 2009 11:03AM 0 0

i personally don't hate anything on snowboarders. i joke around about hating them, but when it comes down to it if they're not doing anything towards me then whats the problem?

some of my best friends board and are filthy, and i love riding with them

Wilsooon
Posts: 321 - Karma: 62
Karma: 62
Posts: 321
Loner
Most snowboarders that are legit don't hate on skiing, its all the little pricks that think they're amazing. There are some pros that hate on skiing a bunch. I try not to hate on snowboarders unless they start shit.  I was reading Snowboarder magazine and I think some hate starts from there, they preach ski-hatin sometimes.

History lesson for anyone interested.  The pictures below are from spring of 1995.  Skiers like Nigel Bolton and myself were experimenting with grabs.  Nigel definetely had a mute grab and I had some kind of messed up crossed grab.  I don't know whether we the first or not, but there definetely weren't many skiers that were grabbing their skis at that time except for Zudniks; which is basically what a straight air truck would be now, grabbing the tips.  If skiers weren't hanging with snowboarders and checking out what they were doing, the new school movement probably would not have happened.  In my case, the snowboarders who I competed with dared me to do some kind of grab.  Also we were building 75 foot tables probably 10 years before the first terrain park was built.  Those are straight 205 slaloms. 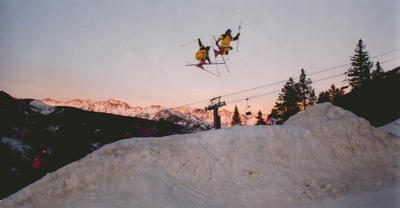 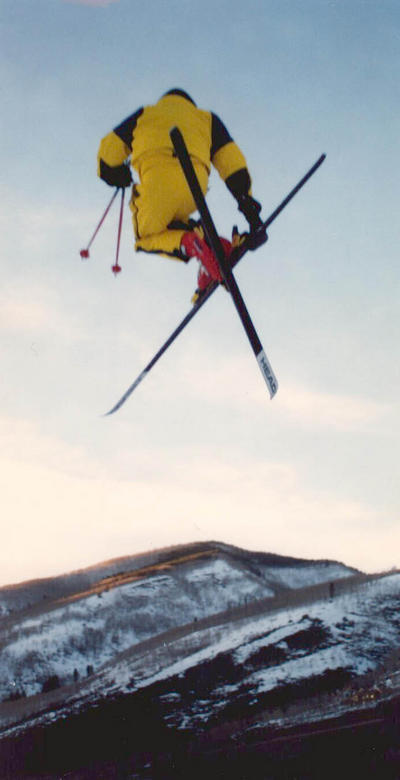 casual
Posts: 6624 - Karma: 5,899
Karma: 5,899
Posts: 6624
No Life
Skiing is cool. Snowboarding is cool. Let's just leave it at that.
I find it to be overwhelmingly the case that any rider (boarder or skier) with a modest degree of ability and a passion for their sport, are stoked on the other sport. At the end of the day, both are looking to have fun and to progress/learn. In my experience, as long as you're courteous, friendly, and generally not an asshole, boarders and skiers get along perfectly well. In fact, I think it's cool to see each sport influence the other (obviously snowboarding has had an infinitely larger effect on newschool skiing than vice versa, but it's beginning to come full circle).
In my opinion, there's a definite correlation between hating on the other, and having a low self-esteem/being insecure. My theory is that someone who's uncomfortable in their own skin and in turn, what they do, reflexively hate on those that do differently out of a preemptive defensiveness, or fear of being judged.
The whole "us vs. them" bullshit is almost entirely the creation of fucking gapers on both sides. Arrogant traditionalist skiers who view snowboarding as some bastardization of their "sacred" sport are fucking lame, and boarders who think that they're somehow edgy or cool by default because they board rather than ski, are equally as lame.
The whole Danny Kass thing was stupid...1.) He was just flat out wrong. AND 2.) Who gives a fuck what he thinks? He's barely clinging to whatever bit of relevancy he's got left. Other than that, I can't recall another example of a legit rider, on either side, having anything negative to say about the other.
Jun 18 2009 12:31PM 0 0

freeballer
Posts: 686 - Karma: 716
Karma: 716
Posts: 686
Ridiculous
It's a weird situation.  I feel like skiing doesn't get enough props.  It has a rich history and has been around forever.  Snowboarding would never exist if it wasn't for skiing.  But then again, the newschool movement of skiing would not exist if it were'nt for snowboarding bypassing the ski movement in the early 90's and forcing skiers to progress.  Park riding would not be around if it weren't for skating.

What pisses me off the most about snowboarding is when they claim that they invented park shredding and that skiers should stay out of there.  Everything in park snowboarding was ripped off from skating, so I think their point is retarded.

Yung_Gnarley
Posts: 9083 - Karma: 2,910
Karma: 2,910
Posts: 9083
Crazy Fool
When it comes down to the person, a really nice snowboarder is just as cool as a nice skier. I know just as many snowboarder kids that snowboard because they love it (not cuz they wanna look cool) as skiers that live for the sport. We're both on the same mountain for the same reason and problems usually don't arise. Only when some gaper snowboarder wants to get some sweet street cred so he can tell his cousin that he stated shit with a skier while they hang out in their huge hotel room at the base.
Jun 18 2009 2:59PM 0 0