The top four links are all about this, and according to two of them, Microsoft knows about the problem.

and what kind of name is zune?

Customers with 30gb Zune devices may experience issues when booting their Zune hardware.  We’re aware of the problem and are working to correct it.  Sorry for the inconvenience, and thanks for your patience!

"do you know how to fix zunes?" 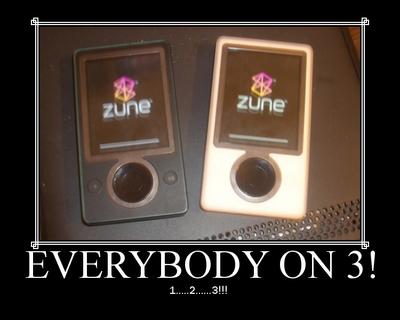 Barf.
Posts: 1188 - Karma: 123
Karma: 123
Posts: 1188
Insane
There have been some rumors about taking apart your Zunes and resetting the hard drive and battey. I wouldn't advise anybody to do this because it voids the warranty. It's the ZUNEACOLYPSE!

C.R.E.A.M
Posts: 2311 - Karma: 115
Karma: 115
Posts: 2311
Addict
yes taking it apart as seen in the rapid repair guide to step 4 and unplugging the hard drive and battery resets the internal clock, showing us that the problem is a software glitch

but also voids the warranty

i just love my iPod.

eric25
Posts: 754 - Karma: 10
Karma: 10
Posts: 754
Ridiculous
By the looks of this thread, Apple has completely taken over Newschoolers. I will never figure it out.

and they said that if you wait until tomorrow (jan 1, 2009) it should work after letting the battery drain and recharge. its because of the leap year

Microsoft said Wednesday that a leap year issue caused problems with the 30-gigabyte versions of its Zune digital music player, following a flood of online customer complaints about the devices freezing up.

The company issued a statement pinpointing “a bug in the internal clock driver related to the way the device handles a leap year.”

Microsoft also said that “the issue should be resolved over the next 24 hours as the time change moves to Jan. 1, 2009.”

This year, an extra day was tacked on to February, making this a leap year. By international agreement, the world’s timekeepers are also adding a “leap second” tonight to keep Earth apace with very precise clocks.

The internal clocks on what is known as the Zune 30 should reset at noon GMT on Thursday, the company said. After that, 30-gigabyte Zune users should follow these three steps:

Zune Pass subscribers may need to sync their devices with their PCs to “refresh the rights to the subscription content you have downloaded to your device,” according to Microsoft’s statement.

Users of the 30GB model began reporting problems on a Microsoft message board early Wednesday. Customers similarly are saying that their digital music players get stuck on the Zune logo screen as it appears to load, and efforts to unjam the device are mostly fruitless.

As of Wednesday afternoon, more than 2,500 comments had been posted on Microsoft's Zune message board in response to an entry entitled “Help-frozen zune!!!!”

“My Zune has managed to freeze itself with the Zune logo and the loading bar on the screen and none of the buttons are responding, rebooting isn't responding, plugging it into the computer isn't responding, nothing is working, and it was working a mere two hours ago,” wrote the person who touched off the discussion.

Since the massive freeze struck shortly before New Year’s Eve, some users have dubbed it “Z2K,” a play off the Y2K bug feared to crash computers in 2000.

Emotions were running high on the Zune message board as some users said they were about to cry and others went so far as to say they might even die without their player. Others cut in, telling people to “CHILL OUT.”

For some, the Zune freeze made them realize just how attached they are to their player, containing music sometimes collected over years.

“My whole life’s music is on mine, over 2,000 songs, so I damn well hope they fix this,” read a posting on the Zune message board.

A few do-it-yourselfers report having attempted an ambitious fix that involves taking the Zune apart and removing the battery with success. But most users, some afraid to dismantle their device, are waiting for Microsoft to find a solution.

The price tag of the Zune 30 was slashed by $50 to $199 in 2007. The 30GB version was the first portable music player by Microsoft, which brought it to market in 2006. Originally just dubbed the Zune, it was later renamed Zune 30 when additional models hit stores. There are several models of Zune players, some with flash memory storage and others with hard drives up to 120GB.

The Zune has between 3 to 4 percent of the digital music player market, which is dominated by Apple’s iPod, with more than 70 percent of the market. Microsoft has sold more than 2 million Zunes. In contrast, Apple sold about 10.6 million iPods alone in the first quarter of 2008.

^ go to that before you disconnect your battery please... save your self the money

Steazel
Posts: 553 - Karma: 16
Karma: 16
Posts: 553
Ridiculous
wow thats so wierd, that actually just happened to mine and i thought that i would have to buy a new one. Hooray!