Replying to Another Avalanche

JeffersonDavis:
what is going on?  Vibes to the victimes 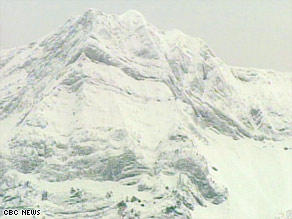 Searchers will continue to look for the other two snowmobilers believed trapped in Sunday's pair of avalanches near Fernie, British Columbia, Constable Louis Saule said.

All eight men -- and three others who escaped -- faced two avalanches Sunday afternoon about 20 kilometers (12.4 miles) east of Fernie, a town in the Canadian Rockies about 300 kilometers (186 miles) southwest of Calgary, Alberta.

The three survivors suffered minor injuries, and one of them was hospitalized overnight.

The men had been in an area called Harvey Pass, which police called a popular backcountry snowmobile destination. Officials said an avalanche buried part of the group, and a second buried the rest as they tried to assist.

"Two of the buried riders managed to self-rescue within about 20 minutes. These two used their avalanche beacons to locate a third buried victim who they rescued after an additional 20 minutes of digging," police said. iReport.com: Wyoming avalanche training covers pulling people out of snow

A search command post was set up Sunday, but darkness and avalanche hazards prompted authorities to postpone the search until Monday.

On Monday morning, before the bodies were found, authorities said searchers and police dogs were being dispatched to the rugged, snowy area, and crews would dig into any sites where searchers thought they might find any of the missing men.

"Reality tells us if you're stuck in the snow for about 24 hours, bad things can happen," he said.

The region has had previous coal mine disasters, "but in recent memory, this is the largest single tragic event to hit this community," Wilks said. iReport.com: Are you there? Share photos, video

He said the snowmobilers are men in their mid- to late 20s and described them as upstanding citizens, most of them working in coal mines or as businessmen.

"All were well aware of the dangers involved in snowmobiling. All are very cautious with what was going on," Wilks said.