You kids and your WRX'S, SLAMMED RIDES, or WUTEVER YOU HAVE

I DONT CARE WUT YOU THINK YOU CAN CALL ME A BIG RED NECK BUT THIS IS UNIQUE AND ITS CLEAN....... IF YOU GUYS LOVE ANYTHING AUTOMOTIVE AND HAVE RESPECT FOR GOOD HARD WORK AND DEDICATION YOU WILL LOVE THIS. 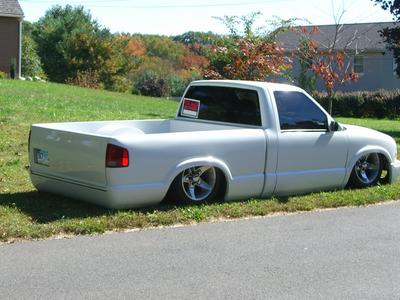 robtheslobonacob
Posts: 471 - Karma: 17
Karma: 17
Posts: 471
Ridiculous
why was the title not in all caps if your caps button is stuck on?

k-rob
Posts: 14215 - Karma: 2,842
Karma: 2,842
Posts: 14215
Crazy Fool
i would rather have a semi than a wrx or even most cars in general. especially something dope like that.
i would also work my entire lifetime on it so that it could turn into a decepticon and my decepticon and i could take over the world.

Legoman
Posts: 533 - Karma: 13
Karma: 13
Posts: 533
Ridiculous
Im sorry that thing is fucking stupid, what is the ground clearance on it because it looked like fuck all from that video. Sure its a cool ass looking truck but whats the point if it cant go anywhere.

vincepru
Posts: 5474 - Karma: 17
Karma: 17
Posts: 5474
No Life
what a waste of money... there is absolutely no functionality in that truck. i doubt he even uses it for its purpose. honestly who has a show ready semi truck? hicks

not so much semi's but like a diesel pickup can whoop the shit out of most cars hands down.

GTI, Chevy Cobalt Turbo SS, the new Evo RalliArt or whatever its called, and Mazda Speed 3.

Driven all of them except the new evo and I can safely say they are all better drives and faster than the rex.  The evo I'll just assume because the normal evo is so much better than the STI these days.  And the MS3 and the Chevy are both significantly faster.

New Subies are whack, the new rex is all family style now, with a tiny little hood scoop and a big ass fucking chassis.

Plus insurance on the rex is out-fucking-rageous.  Insurance on my GTI is cheap as fuck, and it gets dank gas milage.

I sure as hell do want one.