Kicked out for skating

C0RN
Posts: 365 - Karma: 113
Karma: 113
Posts: 365
Loner
So i have seen lots of funny videos and heard good stories about people getting kicked out for skating. post if you have any good stories. this is mine


so i was skating this hospital near my house with my friend and the police pull up, so we run. as im running i get tackled to the ground and held at gunpiont. apparently they thought we were breaking into the hospital to steal drugs.
Sep 5 2008 11:55PM 0 0

k-rob
Posts: 14217 - Karma: 2,850
Karma: 2,850
Posts: 14217
Crazy Fool
i don't own a skateboard but i have a rocky mountain flow and i ride urban sometimes on it downtown and people always give me shit saying things like i'm going to run somebody over or get hit by a car. no cops though.

prontocuts.com
Posts: 5244 - Karma: 36
Karma: 36
Posts: 5244
No Life
Cops are pretty cool here, but the first time I got kicked out was freaked me out because I was in a sketchy alley at night and the cop turned his lights off and snuck up on us, I thought it was a crack dealer or something

so my bros and i were long boarding with a few buddies. we went into a huge parklot tower type thing.
the ramp spiraled all the way down from like 10 stories or more. we ride all the way from the top to bottom and hop on the elevator and back up to lvl 10. as we are going down in a train and just slaloming it up, a cop screams at us. we all try to run but 2 of us get caught and the rest got away running from this fat ass cop. it was tight to say the least, no work at all because of the elevator.

my friend almost ran into an old dude so he jumped off his board and the old guy goes like wtf you couldnt make that turn? and my buds said no i didnt wanna hit you and he was just laughing lol...

slaydave
Posts: 1697 - Karma: 61
Karma: 61
Posts: 1697
Insane
i was rollerblading at this bank after hours once.  seshing this waxed ledge and 3 cruisers pull up on my friend and i.  two come around one side and 1 around the other and they all put on the strobelights and had their guns drawn.  told us to get on the ground and fucking scared the shit out of us.   apparently we had set off an alarm and they thought that we were trying to break in and rob the place...... (cause rollerblade robberies are by far the quickest and most stealth way to get the job done).....

it was a crazy ordeal but once they realized we werent bonnie and clyde, they escorted us back home and my parents found it rather funny.
Sep 6 2008 1:43AM 0 0

neon1peace
Posts: 998 - Karma: -1
Karma: -1
Posts: 998
Insane
Ive seen some cool old people like that.
I was longboarding with friends on this street near my house and this old guy in a car starts to wave his arms and yell at us. We thought he was gonna tell us to get off the road or something. When he got closer he was like, "that was cool, I wanna see you go down again!"
Sep 6 2008 11:51AM 0 0

tBatt
Posts: 9629 - Karma: 524
Karma: 524
Posts: 9629
Crazy Fool
well not skating but we get kicked out of places for biking all the time, most recent we (blue) were biking a little hip at skidmore college and a campus security (red)  came up to a parking lot below us, and drove down a sidewalk, over curbs, and down a footpath going probably 25-30 until his plan was thwarted when he got stopped at a footbridge that goes over a river.

it was kinda similar to the circus.. intense. 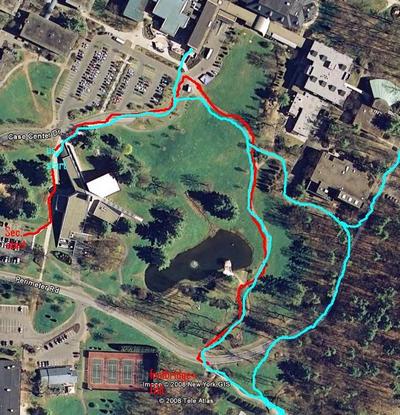 we had a group of about 8 people seshing this bank and a ledge outside of a asian supermarket place.  i was filming and stuff and this crazy old lady walked out of the shop and started watching us.  it should have been a dead givaway what she was doing because she had a phone in her hand but none of us had any idea what she was saying.

well, a cop rolls up and the oldest guys in our group, they were like 20ish at the time, started yelling cops dip, dip.  now, we never run from cops because skating isnt a big deal... but umm we all fucking ran jsut because the older guys said so. well, the 2 older guys hopped into their parked car a block away (we skated to the spot and met them there) and they told us to keep skating at meet them back at some thai restaurant or something (we were on eat street in minneapolis so theres a million ethnic establishments all over).

so we booked it down and alleyway that looped right around the back entrance the alley thing we were skating in.  it was where the sneaky cop drove in from and we ran out from the front of the alley so we figured we did a loop and shook him off.  well we started slowing down and walking so the sounds of our boards didnt give us away.  well, we got effed, because the cop showed up right in front of us.  if we turned left out of the alley/parking log and did a loop, he went right and did a loop.

so we were like, fuck, we're dead, we got caught running, that wasnt supposed to happen.  he goes on the megaphone, "DROP YOUR FUCKING BOARDS AND GET ON THE FUCKING WALL"  he gets out, and of course its an asian cop thats tight with all the asian shop owners.  this guy is big, probably vietnamese, and ripped.  we all dropped our boards, i dropped my camera, all 6 or 7 of us were lined up against the wall hands up.  2 more cars roll up and it was 2 white cops.  they hung back and just looked at all our boards.  they were young, and clearly used to skate those ghetto 80s and 90s boards.

so the entire time, this guy is railing into us, freaking out because we dont have id, saying hes gonna call our parents, confiscate and break our boards, and hand out misdemeanors.  then he starts making up shit while he runs our names, like how come it says i got a warrant for your arrest? you just told me you were clean?  then he goes, oh man, this board looks new, sucks for you, its mine now.

we're scared shitless, and to add insult to injury, the 2 older guys who ran in the car walked up and and started talking to the other cops.  they dont get hassled for i dont even know why.  so after all 6 of us on the wall have soiled ourselves from this angry and potentially abusive cop, he gets in his car and drives away, telling us to never skate in minneapolis again.  white cops drive away, laughing.

i think we got away because there were only 2 white kids in our group.

the first time i smoked was on that dock. its just weird cuz i haven't been around skidmore for like 2 years and i was like "hey i recognize that". cool story hansel i know, but i thought i'd share.