drumbumocdp
Posts: 3119
Karma: 41130
Posts: 3119
Addict
Any body here ski the lip? got some pics. i looked them up on Google but couldn't find many good ones. any sharing would be much obliged.

We are through using the U.S. 5 scale danger rating system for the remainder of the season. The 5 scale (low through extreme) system will be reinstated next season when needed. This GENERAL ADVISORY will be in effect until complete melt out later this summer. The snow coverage that is left has settled out, been skier compacted, and is going thru the late season melt-freeze process. However, the numerous large snowfields may make for a good sliding surface for late season snow. A June or early July snowstorm is not an unheard of occurrence on Mt. Washington. Be prepared for the possibility of new snow instability if this occurs. Also watch for the possibility of sustained warm weather and/or heavy rain to blow out running water from beneath the snow. This has caused wet slush avalanches in Tuckerman and Huntington Ravines in the past. YOU WILL NEED TO PUT YOUR AVALANCHE SKILLS TO WORK FOR THESE LATE SEASON HAZARDS. BE PREPARED TO DO YOUR OWN SNOW STABILITY ASSESSMENTS IF ENTERING AVALANCHE TERRAIN ON MT. WASHINGTON.

THE LIP AND THE TUCKERMAN RAVINE TRAIL THROUGH THE RAVINE FROM LUNCH ROCKS, ON THE FLOOR OF THE BOWL, TO THE JUNCTION WITH THE ALPINE GARDEN TRAIL JUST ABOVE THE HEADWALL ARE CLOSED TO ALL USE. Only this section of the trail is closed. This section is closed annually due to the magnitude of crevasses and undermining that develop in this area during the spring meltout. A fall in this area would have severe consequences. This trail section will be reopened when the tread melts out. Until then, be prepared to use an alternate route. Check in with one of the local visitor centers to determine the status of the closure before starting up. If you use motorized access to the summit of Mt. Washington it is NOT recommended that you descend any route through the Ravines. You will not be aware of the hazards below you. Many have attempted this over the years, often resulting in severe accidents.

BE AWARE OF FALLING ICE. Each year over 1000 tons of ice form on the Headwall and in other areas in Tuckerman Ravine as well as the gullies of Huntington Ravine. In the spring it all comes down, often in pieces larger than cars. This hazard will persist until complete melt out. The best thing you can do to protect yourself is to avoid spending time in the potential path of falling ice. If you are going to enter one of these paths, formulate a plan in advance for what you'll do when ice falls. CREVASSES AND UNDERMINED SNOW appear as the snow pack slowly creeps downhill and separates from the ledges on the Headwall. These openings vary tremendously in size and include the many waterfalls on the Headwall. Hiking up what you plan on skiing is recommended so you can see what you're in for on the way down. This includes analyzing your run out which will become more limited as the season progresses. Skiers and climbers need to pay attention to what is below at all times and constantly evaluate the potential outcome of a fall or slide. As the water runs and melts out the snow from beneath, undermining will continue to occur, collapsing the snow above. Be extremely cautious in these areas. 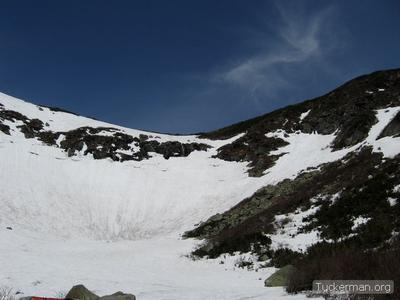 THIS IS THE LAST ADVISORY FOR THE SEASON. HOWEVER, CERTAIN HAZARDS WILL PERSIST UNTIL MELTOUT SO PLEASE READ THIS FINAL ADVISORY BEFORE HEADING INTO THE RAVINES OR TO THE SUMMIT OF MT. WASHINGTON. WE'VE ENJOYED SEEING ALL OF YOU IN THE MOUNTAINS AND LOOK FORWARD TO NEXT WINTER.
Jun 13 2008 9:49PM

jriley
Posts: 198
Karma: 3604
Posts: 198
Pro
this is by far the most disgraceful thing I have seen on this website

treesmann
Posts: 2675
Karma: 151653
Posts: 2675
Addict
haha i took a couple friends of mine for their first tux trip in mid may. i never told them what they were in for so they had no idea how much of a hike it was to ski. even though they dont like hikin it was worth it for them

Treestman
Posts: 3040
Karma: 119803
Posts: 3040
Addict
haha i dragged a couple of my ns friends up it, they had no idea what they were gettin into. they hadnt ever hiked anything really and the weight of the skis and booots made it worse.

i mean it was mid may, they did hate the hiking part, but overall  they had fun.

if uve never hiked shit before, my advice is bring a lot of water, use hiking boots or trail runners, not skate shoes, and have a decent pack, and extra clothes, bc it could be a lot colder up there then at the trailhead
Jun 14 2008 3:04PM

alev
Posts: 7810
Karma: 138279
Posts: 7810
Crazy Fool
dude you should really know what youre getting into when you decide to hike. like how stupid and uneducated can you be? how can you represent the east in your name if you dont know anything about tuckermans
Jun 16 2008 7:02PM

ginty
Posts: 1073
Karma: 37338
Posts: 1073
Insane
haha yea i did it the first week in june
the hike was miserable ahaha, i just kept going on and on and on,
but once you get to the snow it was awesome, especially when i realized i was skiing in june on snow.... on the east coast
but deff bring extra clothes it was 90 degrees at the bottom but up at tucks it was prob around 40 degrees and felt cooler with the wind

dgcarbs
Posts: 438
Karma: 3608
Posts: 438
Ridiculous
yeah it was worth it, i was one of those kids up in the ravine. i actually did a lot more than 2 1/2 miles though because i summited first, it was wicked funny at the top because all of the tourists and gapers that came up on the cog and auto road were astounded by the fact people hike washington, and also that there was still enough snow to ski on.

drumbumocdp
Posts: 3119
Karma: 41130
Posts: 3119
Addict
are you the kid with the K2's? i think i passed you on the way down. a guy that looked like chuck noris asked you if you were skiing tucks? that was my dad.

drumbumocdp
Posts: 3119
Karma: 41130
Posts: 3119
Addict
tuckermans is a ravine on mount washington (highest peak in the north east(new hampture)) and it gets mad snow blown into it in the winter so you can ski it into july. it has 57 degree slopes(something like that anyway) and is pretty cool. defiantly look it up

dgcarbs
Posts: 438
Karma: 3608
Posts: 438
Ridiculous
yeah that was me, i don't remember your dad b/c almost every person i saw was asking those same questions

drumbumocdp
Posts: 3119
Karma: 41130
Posts: 3119
Addict
oh sweet deal man. i got to the top about 40 mins before you and saw you right when you got onto the road. i was on my way down. fuck those people who drive up and down after my 4 hour hike. fuck em in the ass

dgcarbs
Posts: 438
Karma: 3608
Posts: 438
Ridiculous
the snow was actually pretty decent, if anything it was more icey than slushy. I have no hate for all the tourists who drive or take the cog up, if anything i thought it was pretty amusing how gaperish many of them were, including the three or four people who asked if they could take my picture and the others who took my picture while thinking i didn't notice. best qoute of they day was"no one will belive that i saw someone skiing in july so can take a picture of you"