Oh god! Did her mom have sex with an octopus?

Mat.
Posts: 7167 - Karma: 94
Karma: 94
Posts: 7167
Crazy Fool
i wonder if she has control of the extra two legs and arms?
doesnt look like it, but imagine if she did.
why is it always those kinda familys that you see in the news with some mutated child. 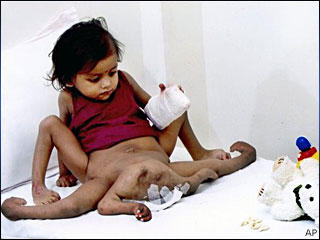 Skillz
Posts: 945 - Karma: 51
Karma: 51
Posts: 945
Insane
Update at 3:08 a.m. ET Wednesday: The operation has ended after 27 hours and doctors say it was successful, the BBC reports. "Lakshmi is stable and sound," Dr. Sharan Patil, the lead surgeon, told a nationally broadcast news conference. "We will keep a close watch on her for the next 48 to 72 hours and won't move from the hospital until she stabilises." He added that he was "optimistic about the child's survival."
Nov 7 2007 3:31PM 0 0

i wonder what they did with the extra limbs after they got cut off?