yeah how about them sox!?!?! muhahahaha

hate to say it but i called it. 4 games.

pbandj
Posts: 5610 - Karma: 29
Karma: 29
Posts: 5610
No Life
you would say that, and i never saw the rockies you were talking about a fe days ago, i just saw them get swept though, boston knows how to party and i specifically remember a riot in denver after the avalanche won the stanley cup a few years back

M+M
Posts: 7935 - Karma: 25
Karma: 25
Posts: 7935
Crazy Fool
HAHA dude you are the stupidest fuck ever, so kids CELBRATED after winning the world seriers, stop being so bitter that colorado sucks balls and national league is so much worse then AL

I really thought the rockies had a chance but remember not to sell them short. They cost less than 1/3 of the sox and have a very young team.

Well get you guys next year.

pbandj
Posts: 5610 - Karma: 29
Karma: 29
Posts: 5610
No Life
just because there are a lot of stars doesn't mean that there isn't any chemistry between the players, many players love playing in boston, not to mention you were talking about home grown and the sox had two excellent rookies (pedroia and ellsbury) not to mention clay bucholtz who came up from AAA and pitched a 9 inning no hitter, so yes the sox have a big budget, but they still have a lot of young players, and because of that they have a very good looking future

ColbyV
Posts: 1125 - Karma: 57
Karma: 57
Posts: 1125
Insane
maybe if people realized that the reason the Sox have such a big payroll is because their fans actually care and fenway sells out the first week the tickets are open - even when they are bad we still love and support them - i can guarantee that half the rockies fans in the stadium or at home praying that "their team" will win have watched under 50 complete Rockies games in their lifetime - boston fans care and boston fans deserve this
Oct 29 2007 6:10PM 0 0

wrenegade
Posts: 6631 - Karma: 40
Karma: 40
Posts: 6631
No Life
Just because there are a bunch of stars doesn't mean they don't all get along extremely well. The Red Sox, while yes, they do have a large budget, don't only buy their stars. It's a combination of good drafting (Pedroira, Youkilis, Ellsbury) good trades (Beckett, Ortiz, Lowell) and big purchases (Manny, Dice-K). Theo Epstein is a smart guy and he has built a good team. So many of our guys are on contract for years to come and its not because we signed them all as huge stars with big money contracts.

I'm not knocking on the Rockies either, they've got a core of good players that should also stick around in their organization for years to come, and hopefully with a little more money, can afford to plug the holes they have. I don't see this team disappearing like Florida seems to do every so often, they look like they'll be a legitimate contender for a least a couple years.
Oct 29 2007 6:18PM 0 0

crooks
Posts: 14693 - Karma: 785
Karma: 785
Posts: 14693
Crazy Fool
word.. don't bitch about how we have a big payroll and how the rockies don't... fenway has sold out every game for the past 5 years, and the seats go over twice as much as they do in CO. and whoever brought up the fact that the red sox won 7 in 86 years fuck you.. this is the first time colorado has even made it to the world series.. and they never even won a game, so don't even bring that bullshit up. 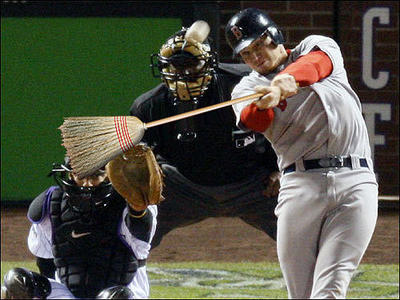 BOSTON—Although Colorado players, managers, and coaches said they would not issue a formal complaint about the playing conditions in Boston, the Rockies have gone on record as saying the "thick, soupy sea-level air" in the city made it unusually difficult for them to play baseball. "Seriously, I can barely push my bat through this stuff," said Rockies slugger Matt Holliday, who collapsed and had to be administered less oxygen after Wednesday's practice. "I was hitting them as hard as I could out there and the ball was still returning to the earth. We might as well be playing in quicksand." Other Rockies players were equally vocal in their criticism of the hostile atmosphere in Boston, with Kaz Matsui claiming he found it hard to slide through the viscous air and Willie Taveras aggravating a recent thigh injury while attempting to stand up quickly.

ps. everyone this is a fake story, however im sure someone thought about saying it.

This is a fake news story.

Oh ya and enjoy your shitty mountians I have gone skiing 5 times this year.

Quinny
Posts: 3470 - Karma: 125
Karma: 125
Posts: 3470
Addict
Disappointing the Rockies lost to be sure, but I'm still damn proud of my team and I guarantee none of you picked them to go this far. It's our greatest season ever, and I'm not sorry one bit.

Oh, and the argument that Sox fans are idiots because they had a pseudo-riot is fucking retarded, Denverites did that same thing when both the Broncos and Avs won their first titles, and I guarantee the same thing would have happened if the Rockies won the series.

I have no ill feelings towards the Sox, only except that you have nearly triple our payroll and use a DH, but I can't blame them because MLB runs the league system like shit. The Boston franchise conducts themselves much more professionally than a certain other New England sports team.

acc
Posts: 4122 - Karma: 221
Karma: 221
Posts: 4122
No Life
Bitch bitch bitch bitch bitch.  Just shut up.  98% of Colorado fans that posted here were so high on their team winning, claiming all this shit.  Now you lost, and couldn't win a single friggen game and you're sitting here talking shit about us and making excuses.  SUCK IT UP!  You lost, obviously the Rockies didn't play as well when they needed to and got smoked in the end.

Those Red Sox are more of a team than the 04 one was and seriously have you been watching the Sox all season?  I think not.  They are the craziest bunch of players ever on that team and probably crazier than any other team.  They party together like no tomorrow and there's no bitching among "stars" on the team.  After the ALDS they were partying at Game On at like 3 in the morning pouring drinks for each other beind the bar and shit.  The ALCS they threw a party on the field for like 2 hours with each other, their families, and the fans!  Post World Series they waited for Papi who was doing an interview and he came in last jumped on a table and ALL OF THEM sprayed him with champagne.  They all wanted the trophy, they all wanted the ring, & they all wanted the money.  Now they've got it and next year they'll be even nastier & they're going to want it all, all over again.  Our bullpen refers to themselves as the Pirates of the Carribean!  I mean c'mon shit what other team is as tight?

Homegrown?  Ahh Manny Delcarmen is from Hyde Park which is equivalent to being from the Bronx if you're a NYer.  Ellsbury, Pedroia, and Lester have all come from our AA farm system over the past few years.  Wake has been with the team for 5+ along with Manny, Tek, & Timlin

I also agree Ellsbury was right up there with Lowell for MVP candidate.  It doesn't matter if you're a rookie.  That's a retarded statement.  It's WORLD SERIES MVP.  He was finally put in to play during the whole World Series and look how much better he did than Coco overall.   He's going to be a rookie next season too because he didn't get to play enough to be considered a second year player come next spring.  Back to back rookie of the year awards for the Sox?  Quite possible.

So please, all of you Colorado folks bitching, get your ass up and go ski since you actually can at this point.  No one on this site is arguing that with you, but shit some professional athletes winning a championship doesn't have shit to do with the fact that Colorado has better mountains.  We all fucking know that.  Why do you think there are so many Sox fans in Colorado?  I know a good 15-20 people that live in Boulder that are from New England.