In a bit of a pickle... [vehicle advice]

2-Dodge neon '95 has a bit of a cracking problem with the paint, i think it has like 107,000km's on it i think theres nothign really been done too it, havent seen it yet not sure if its standard or automatic... well i looked at it yesterday, and its in good shape(minus the paint)

free_ski
Posts: 447 - Karma: 14
Karma: 14
Posts: 447
Ridiculous
Look around more, there are deals to be had everyday. Dont rush into things, demand a test drive and if your not a mechanic, have a trusted mechanic check them out. Even though the Jetta has a fresh engine, 170,000km is alot of miles on the chassis, trans and electrical system. A trans can be costly, so can suspension work. Even though the Jetta is a better car and may be a better deal, consider what it costs to fix things, parts for VW's are many times more expensive than American cars and are harder to find. Get a carfax report if you can, they always help. Any more questions just ask. Good luck. 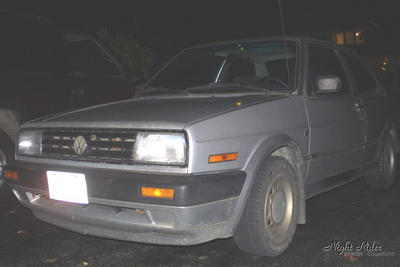 SteveXs2
Posts: 7922 - Karma: 36
Karma: 36
Posts: 7922
Crazy Fool
The Jetta's likely got a 1.8L 8v with Bosch Mototronic FI. I'm not familiar with the newer mkII Jettas but that's usually what they've got unless it's a GLX. Anyway, a chip for them is about $250 and it gives them a higher redline (6900rpm) and a smoother torque curve. Would be a worthy investment in one that's in good shape.

Aside from that, intake/exhaust, stiffer suspension, and lighter wheels are some more cheap mods for Jettas. When I'm done school, I'm going to pick up another Jetta for a project and see where I can go with it.

MLB
Posts: 4462 - Karma: 299
Karma: 299
Posts: 4462
No Life
First things first...go through it with an independant mechanic, not the guy who sold you the car. Really find out if you have some big problems. You may say there is no rust, but on a car that old...there is gonna be some, and you need to know if it is going to matter.

Second, have him check the engine. Check all the fluids, the pressures, just to make sure everything is ok. If the mechanic says its all good then mod it.

But you have to ask your self this question.......if this is the car your gonna use in the winter, is modding it such a good thing. When you drive in the winter you put your car through huge amounts of salt, snow, ice, and cold temps. Lowered cars, with body kits, on big rims don't do soo great on the snow.

SteveXs2
Posts: 7922 - Karma: 36
Karma: 36
Posts: 7922
Crazy Fool
Lowering it with stiffer suspension not only looks better but causes it to handle a lot better, too, considering you've got a lower center of gravity and less body roll. Of course, overdoing it would be lowriders, who do it for the look instead of any sort of performance gains.

And just so you know, these are some estimates as to what the work you want to do would cost you:

Brakes - I'm assuming you're just talking about getting new pads installed and new shoes on the rear, so you're not looking at a lot here. $50 - $200 depending on how you do it, I guess.

Exhaust - If you go buy a fart can, I will kill you. No joke. If you want performance gains, you'd want a catback exhaust, flow-through cat, headers, whatever, because that's actually going to help you (backpressure caused by a restrictive exhaust just creates pressure on the pistons so you lose some power, reducing backpressure = more power), a catback for a Jetta will cost you around $500 for a cheap one.

Turbo - There's a lot more work than you'd think that goes into a turbo. You're not going to be able to turbocharge the 1.8L engine without a whole lot of major engine work and fabrication. You'd save money and time going and getting a turbocharged engine from an older Audi and swapping that in with some fabrication.

Suspension - Stiffer and maybe an inch or two lower, you're looking at $200 for cheap stuff and progressively higher after that.

Rims - Can be cheap since you can go to a junkyard and get some off another car, clean them up, and roll. Luckily for money's sake, Jetta's have a 4x100 bolt pattern so finding rims is easy. But, for good rims, expect to spend at least $200 per rim. The best looking rims on Jettas are often made by BBS and you're looking at more like $500 per rim in that case.

Paint Job - $3,000. Like I said to you on MSN, my nextdoor neighbour works at Norm's and to get it done right they strip the paint down to the bare metal after removing all the trim, sand it smooth, fill any areas that need it, seal, prime a few times with wet sanding in betwee, then paint many coats with wet sanding in between coats and finally either clear coat or polish, reinstall all trim, and it's done. It's a LOT of work. If you were to paint yourself, just sand off a few layers of paint, maybe down to the primer, then spray on some new primer and wet sand and paint, wet sand in between coats, and then get an electric polisher to shine it up. You're going to need a paint gun and air compressor, too, unless you like uneven strokes caused by aerosol cans because they rely on being well shaked. Don't get me wrong, aerosol cans can do a good job when done well, my Jetta had a few spots that were rattle-canned, but to do it right so it lasts more than a year you need to do all the prep and spray well.
Oct 3 2006 3:36PM 0 0
All times are Eastern (-5)